Introducing… The History Of Rock 1973 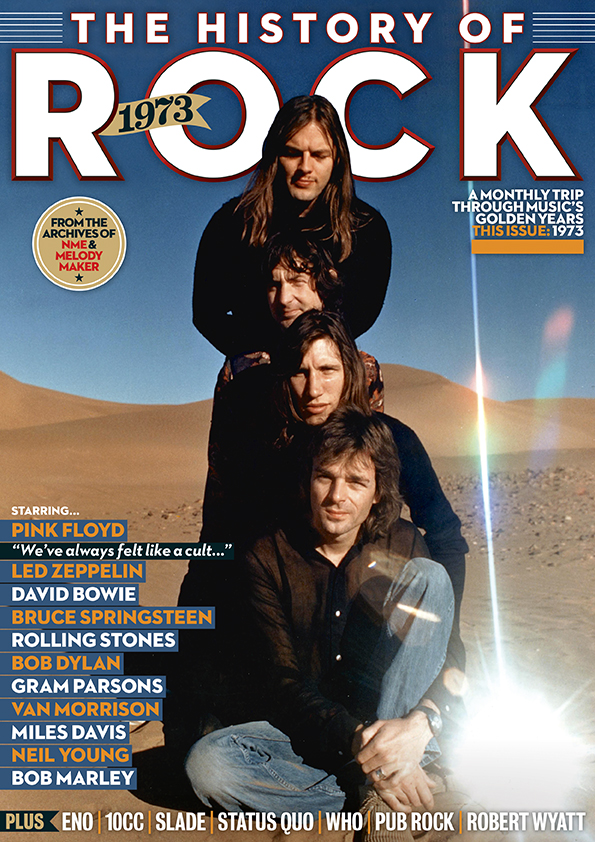 Hopefully, in the wake of the new Uncut, you managed to bag some tickets for Springsteen’s UK tour this spring when they went on sale last week. Now, we have word on more Bruce live activity: a show at Max’s Kansas City, New York, on July 23. Support comes from a promising Jamaican act, The Wailers.

“It depends how seriously you take yourself,” says Bruce, upfront of the show. “It’s really hard for me to talk about the words ‘cause I have no particular things to say. I mean, I never read poetry ‘cause I don’t like to read too much; I never read anything to the degree of remembering. Y’know, as soon as someone says ‘this guy is the next Bob Dylan’ you’re dead, and I can’t believe they don’t know that.

“Of course there are similarities! First thing I heard was on AM, ‘Like A Rolling Stone’, and I grew up with that. But the public always has this huge mouth, open wide and going ‘more, more!’ Even if someone was dropping dead they’d still shout ‘more!’ They’re brought up to do that, but it’s a fight to keep your identity against people who want to cloud it over…

“Despite all the hype,” he muses, “I’m remaining pretty obscure…”

That, of course, was Bruce Springsteen in 1973, talking to the Melody Maker’s Michael Watts around the release of his debut album. You can find the whole piece in the latest edition of our encyclopaedic History Of Rock series, which is due to go on sale in the UK this Thursday (though you should be able to order it, along with the volumes dedicated to 1965 through 1972, from our Uncut online shop).

As you can see, Pink Floyd are on the cover, and inside you’ll find David Gilmour discussing the significant release that turns out to be “The Dark Side Of The Moon”. “We thought it was obvious what the album was about,” he says, “but still a lot of people didn’t know what the LP was about. They just couldn’t say – and I was really surprised. They didn’t see it was about the pressures that can drive a young chap mad. I really don’t know if our things get through, but you have to carry on hoping. Our music is about neuroses, but that doesn’t mean that we are neurotic. We are able to see it, and discuss it.”

“We’re bound to argue because we are all very different,” he continues. “I’m sure our public image is of 100 per cent spaced out drug addicts, out of our minds on acid. People do get strange ideas about us…”

For the truth, from 1973, The History Of Rock is the essential document. Here’s John Robinson to introduce the issue…

“Welcome to 1973. This is a year in which everyone seems to be saying goodbye. At the start of the year, Leonard Cohen comes to London to say that he is deeply troubled by the music business, and that he’s planning a dignified exit. Later in the year Neil Young says much the same. Eno leaves Roxy, as Ronnie Lane does the Faces. David Bowie, meanwhile, apparently quits music altogether.

“Those that remain, however, reap some rich rewards. Bands like Led Zeppelin, The Who, or our cover stars Pink Floyd have now all escaped their niches in the previous decade, to flourish in a new context. Zeppelin play to more people than ever before, duly making an enormous amount of money. Floyd do likewise, but are more troubled by their conscience and by their past.

“For Floyd, the absence of Syd Barrett (and the mental unrest that led to his absence) is articulated in one of the most successful records of all time. Perhaps in homage to a man who was not there, the band themselves fail to appear at the launch for ‘The Dark Side Of The Moon’.

“1973 also brings dramatic new arrivals. The Wailers, and their frontman Bob Marley have suffered hardships in the Jamaican music business, but now finally found a patron who will treat them fairly. In New York, the singer Bruce Springsteen is signed by John Hammond – the man who took a chance on Bob Dylan. At a bizarre engagement in New York, Springsteen and Marley play a show together.

“This is the world of The History Of Rock, a monthly magazine which follows
each strange turn of the rock revolution. Diligent, passionate and increasingly stylish contemporary reporters were there to chronicle them then. This publication reaps the benefits of their understanding for the reader decades later, one year at a time.

“In the pages of this ninth issue, dedicated to 1973, you will find verbatim articles from frontline staffers, compiled into long and illuminating reads. Missed an issue? You can find out how to rectify that by checking our generously-stocked online shop.

“At this stage though, representatives from New Musical Express and Melody Maker are where it matters. Several miles above Mexico with Bob Dylan. In hospital with Robert Wyatt. Watching as Captain Beefheart meets George Best at dinner.

“Join them there. We’ll get your table ready.”