Introducing… The History Of Rock: 1972

… And who else but Bowie could be on the cover? 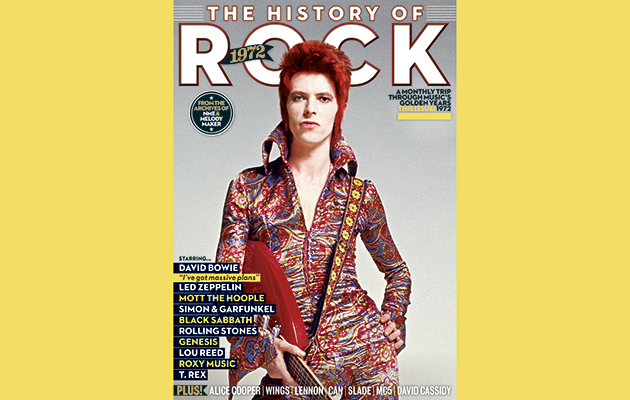 When the news of David Bowie’s death broke on January 11, amidst all the grief, there was not much professional time for reflection: we had a memorial issue to create at speed (fortunately, David Cavanagh still managed to write a piece for us that was as thoughtful as it was moving). At that point, though, we already had a magazine with Bowie on the cover more or less ready to roll off the presses. The latest edition of our History Of Rock series tackles the momentous musical events of 1972: who else but Bowie could encapsulate the spirit of the year?

The History Of Rock: 1972 arrives in UK shops on Thursday, but you can order The History Of Rock: 1972 now from our online shop. In it, you’ll find reports from the first live excursions of Ziggy Stardust & The Spiders From Mars, revelatory interviews that find Bowie opening up about his sexuality for the first time – and calling Marc Bolan “prissy”. Plus stories on Lou Reed and Mott The Hoople in which the great man’s aura and influence reverberate throughout.

All that, of course, is only part of the rich smorgasbord on offer in this deluxe, historically startling mag. Here’s John Robinson, as ever, to provide the full introduction…

“Welcome to 1972. For the last 18 months, a sense of fun has gradually been squeezing out the worthy musical explorations of the recent blues boom. ‘Underground’ spirit lives on in the likes of Hawkwind, 1972’s unlikeliest chart stars. For the most part, however, the year’s most successful music is colourful and boldly-stated.

“The dominant music listener is no longer the serious university undergraduate, but the teenager, who propels a flashy and addictive version of rock’n’roll revivalism into a popularity unseen since the Beatles. 1971’s messiah, Marc Bolan, is the year’s biggest seller, but his elfin head lies uneasy under the crown.

“Our cover star, David Bowie, however, instantly presents a more serious proposition. He writes, performs, and inspires frantic adoration for his theatrical rock. He even rejuvenates careers – a service he performs this year for Mott The Hoople, Iggy Pop and Lou Reed. The papers call his music ‘camp rock’. Rod Stewart doesn’t know what to think.

“Bowie balances his multiple roles with apparent ease, and the character of the year is altered irrevocably by him, as he changes musical trends, wields influence, and becomes a topic of everyone’s conversation. He is, it seems, everywhere.

“This is the world of The History Of Rock, a monthly magazine which follows the tremors of rock revolution as they mount in intensity. Diligent, passionate and increasingly stylish contemporary reporters were there to chronicle them then. This publication reaps the benefits of their understanding for the reader decades later, one year at a time.

“In the pages of this eighth issue, dedicated to 1972, you will find verbatim articles from frontline staffers, compiled into long and illuminating reads. Missed an issue? You can get hold of previous History Of Rock issues from our online shop.

“At this stage though, representatives from New Musical Express and (i)Melody Maker are where it matters. Bitching about Bolan. Smoking with Lennon in New York. Watching Lou Reed’s ego run riot. ‘Everyone else is now at the point where I was at in 1967,’ says Lou in these pages. ‘Where will they be in five years?’

“Join him here. Or even there. It’ll be good to rap together.”