Introducing… The History Of Rock: 1968

This issue: The Who, Cream, Led Zeppelin, Aretha Franklin, The Doors, Sly & The Family Stone, George Best and more… 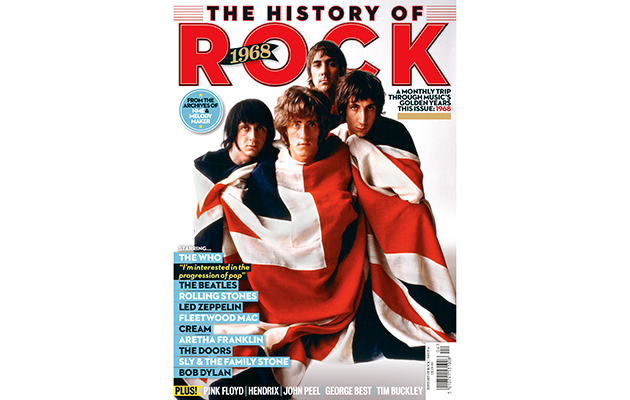 This seems to have come round a bit quicker than usual (probably because I was late to plug the 1967 edition), but the latest issue of The History Of Rock, our deep and rewarding new archive mag, is out this week. This one deals, logically enough, with 1968, introducing a bunch of new faces to the pantheon: Aretha, The Doors, Sly Stone, Fleetwood Mac, Tim Buckley and, oh yes, Led Zeppelin. Plus George Best does a shift reviewing the singles for Melody Maker.

“Welcome to 1968. After 1967’s colourful revelations and occasionally grandiose musical experimentation, 1968 has its feet more firmly planted on the ground. The gurus and the hallucinogens of the past twelve months have imparted their knowledge, and the music world is now for the most part slightly more suspicious of whim and fancy.

“No-one precisely says this is their plan (although Paul McCartney has been murmuring about “getting back” for a while), but there is a palpable swing away from the head trips of the studio and towards the heart: to early inspirations, live music. Later in the year, the double album released by the Beatles will contain strong flavours of blues and rock’n’roll, the year’s two principal revivals. Does this now mean the Beatles are taking a step backwards? As Ringo Starr philosophically remarks: ‘It’s not forwards or backwards. It’s just a step.’

“Bob Dylan also sets an anomalous tempo, established early in the year with the bucolic minimalism of ‘John Wesley Harding’. Dylan’s continued absence from the promotional scene allows him to move with a freedom not permitted his British contemporaries, and his absence creates a vacuum that myth, and under-the-counter recordings, step in to fill. British groups like our cover stars The Who, meanwhile, grasp the opportunities of America. So effectively in fact, even the Beatles are thinking about playing live again.

“The ‘underground’, with its light shows and flowery clothing, has for the most part dispersed – but still, new scenes are springing up from a reinvigorated, less formal live music circuit. With them comes a new generation of reporters, less immediately concerned with proximity to established stars, but with these new musical stirrings, and dedicated to seeking out the personalities behind them.

“This is the world of The History Of Rock, a monthly magazine which reaps the benefits of their reporting for the reader decades later, one year at a time. In the pages of this fourth issue, dedicated to 1968, you will find verbatim articles from frontline staffers, compiled into long and illuminating reads. Missed one? You can find out how to rectify that at our online shop.

“At this stage though, representatives from New Musical Express and Melody Maker are where it matters. At a pub lock-in with Paul McCartney. On the set of Performance, awaiting the arrival of Mick Jagger. Discussing laxatives with Louis Armstrong is Batley, West Yorkshire.

“Join them there. And, like Louis says: ‘Leave it all behind ya’.”