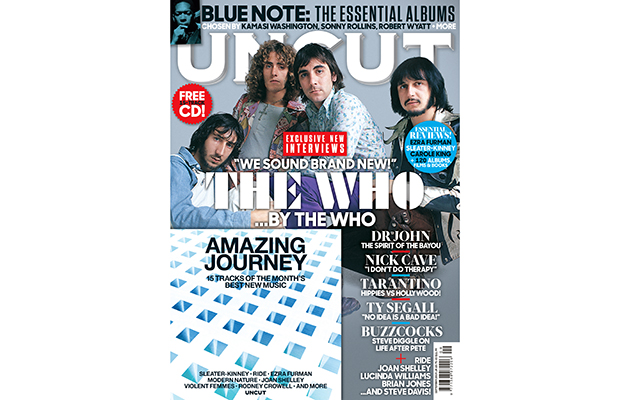 Let’s begin in New York, where Nick Hasted catches up with The Who in the aftermath of a typically incendiary show at Madison Square Garden. Over a series of extensive interviews, Nick discovers plenty about the weird logistics of The Who’s 2019 – involving a symphonic reworking of Tommy, an orchestral tour and their first new studio album for 13 years. What do we learn about this latest, long-awaited opus? I don’t want to give too much away, of course, but depending who you believe it has either “some of the best Who songs since Quadrophenia” or else, “It’s our best album since Who’s Next.” Beyond that, though, Nick’s interview highlights the exceptionally complex relationship Roger Daltrey and Pete Townshend have with their back catalogue – and with each other – and asks how long they can continue to operate at such a high level. “I don’t know what people want out of The Who any more,” admits Daltrey.

A few months ago, I received a letter from Alan English, one of our readers, who mentioned that, among other things, he was beginning to explore jazz – and, in particular, 1950s Blue Note albums. “I am sure there are many like me,” he wrote, “who would appreciate a good primer series on the label from a knowledgeable writer.” Serendipitously, we were already beavering away on an extensive survey of the label’s greatest albums. And I hope Alan will be pleased to learn that we haven’t solicited the talents of just one writer. For this Herculean task we have assembled an illustrious lineup of musicians, jazzers and assorted heads to assist us in compiling a definitive Blue Note Top 30. Rather than add to this challenge by trying to rank them in order of merit, we chose to arrange them by release date, beginning with Sonny Rollins on Bud Powell’s The Amazing Bud Powell from 1952 and ending with Cassandra Wilson on Don Byron’s 2000 album, A Fine Line: Arias And Lieder. Rollins and Wilson are just two of the artists involved; you’ll find contributions from Robert Wyatt, Kamasi Washington, Michael Chapman, Matthew E White, Norah Jones, Shabaka Hutchings, Bobby McFerrin, Nubya Garcia and John McLaughlin, among many others.

Elsewhere, we bid fond farewell to Dr John, visit Joan Shelley at home in rural Kentucky, meet Quentin Tarantino on the set of his latest film, reconnect with a Lucinda Williams classic, (shoe)gaze at Ride’s illustrious career to date and talk acid trips, horror films and sausage dogs with Ty Segall. It is, I’m proud to say, one of our finest issues. Enjoy!