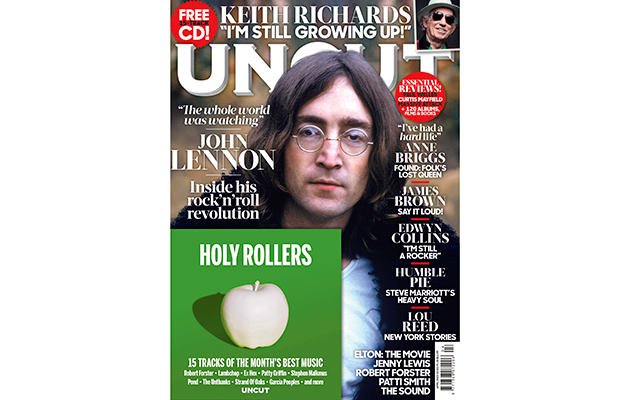 Welcome to the new issue of Uncut. Our cover star is John Lennon, whose momentous 1969 is documented here by Peter Watts – with a little help from assorted eyewitnesses. You could argue that every year during the 1960s was similarly dramatic for the Beatle – but even by those dizzying standards, 1969 found Lennon at a pivotal point in his life, ready to embrace new possibilities. This, then, was a bewildering 12 months that took in four albums, three concerts, two bed-ins and a marriage. Join us for free jazz in Cambridge, rock’n’roll in Toronto and Peace And Love For Christmas; radical interventions, performance art and the amazing Plastic Ono Band. “He never said to me, ‘I’m doing this to blow up The Beatles,’” says one confidant. “But I felt that was what was happening.”

Keith Richards revisits his solo debut Talk Is Cheap, recorded during that long ’80s hiatus when the Stones’ future looked uncertain to many. Not Richards, of course; “I had no doubt the Stones would regroup,” he says confidently. “They’ve got nowhere else to go!” We talk to the reclusive English folk singer Anne Briggs talks about her brief but indelible career – and why it had to end so soon. It’s a haunting interview; full of darkness, anger and revelations. “I learned to read when I was about five years old and all I wanted to be was Mowgli,” she tells Jim Wirth. “Mowgli could do all of the things I wasn’t allowed to do.”

Elsewhere, Steve Marriott swaps Small Faces for Humble Pie – whose remarkable story is recounted by Marriott’s bandmates Peter Frampton, Jerry Shirley and Clem Clemson. Michael Odell spends a bracing 24 hours in the wilds of northern Scotland with Edwyn Collins and his long-suffering wife, Grace Maxwell. “Do your flies up, we’ve got a guest,” she admonishes her errant husband. And then there is Lou Reed, on the brink of a mid-career renaissance with his New York album. Tom Pinnock talks to Reed’s collaborators (including Moe Tucker) about this brilliant LP – and how it lead to the VU reunion.

Uncut is committed to new music and in this issue you can read about Ex Hex, The Comet Is Coming and Hand Habits. We also check in with Pond, Lambchop, Stephen Malkmus and meet shadowy ‘new’ outfit, The Better Community Oblivion Center.

There’s plenty here; we hope you enjoy it.