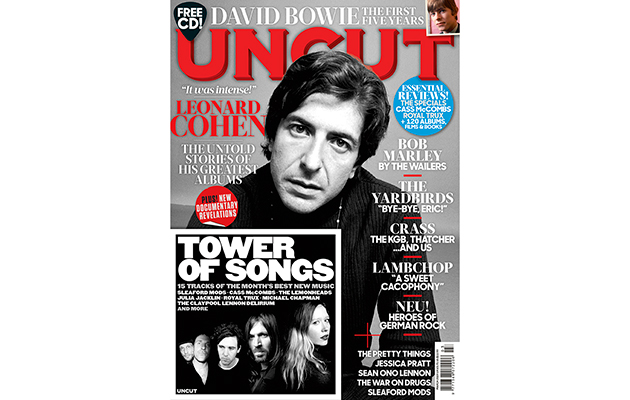 Leonard Cohen has admirers in some unexpected places. Over the Christmas break, Prince Charles selected “Take This Waltz” on a special edition of Radio 3’s programme, Private Passions. “I’ve always loved Leonard Cohen’s voice and his whole approach to the way he sang,” said the heir to the throne. “He was obviously incredibly sophisticated in the way he sang, hut also wrote. I find it very moving.”

Cohen, of course, lived for a short while in London during his mid-twenties; though I’m not certain he ever publicly aired his views of the British monarchy. Nevertheless, Charles’ reminds us of the enduring qualities of Cohen’s music; his abundant gifts as a writer and singer. In the new issue of Uncut – in shops now but available to buy online now – our investigation of Cohen’s musical history – a study of his key albums, illuminated by his principal collaborators – reveals an artist whose work has gained a kind of mythic potency. But what about the craft and art behind this process? Graeme Thomson discovers a remarkable body of work shepherded into existence as much my Cohen’s elusive genius as by the finest caviar, bottles of Château Lafite and glamorous romantic liaisons. We hear tales of a “scruffy dude in his ubiquitous safari suit” whose songs were “threaded with love and loss”. We also preview a revelatory new documentary, Marianne And Leonard: Words Of Love, which premiers in Sundance later this month.

There’s more, though. The Yardbirds recall their sensational breakthrough – and how it led to the departure of their then-guitarist, Eric Clapton (“I wonder what became of him?”, asks one former member). We relive the many peaks of Bob Marley’s career through his long-serving backing band, The Wailers. David Bowie’s “long apprenticeship” is explored, we introduce Jessica Pratt to the Uncut universe and catch up with Lambchop’s Kurt Wagner at home in Nashville. Michael Rother takes us inside Neu! while Crass share some hair-raising stories involving the KGB, Margaret Thatcher and the murky world of teenage magazine giveaways.

If that wasn’t enough, we discover what’s next for The Pretty Things, Sean Ono Lennon explains why he’s not an occultist (he just likes the fab gear), The Long Ryders return and Shabaka Hutchings unveils new plans for his astonishing space-jazz trio, The Comet Is Coming.

As ever, let us know what you think.

The March 2019 issue of Uncut is now on sale in the UK – with Leonard Cohen on the cover. Inside, you’ll find David Bowie, Bob Marley, The Yardbirds, Lambchop, Jessica Pratt, Crass, Neu!, Sean Ono Lennon and much more. Our 15-track CD also showcases the best of the month’s new music, including Cass McCombs, Sleaford Mods, Julia Jacklin, Royal Trux.