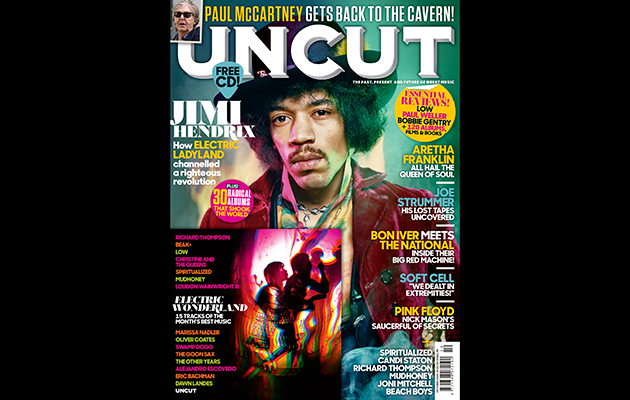 We live in difficult times – and sometimes it is hard to know what the appropriate response should be. A couple of recent records have done an excellent job navigating perilous current events. Sons Of Kemet’s splendid album Your Queen Is A Reptile found fresh ways to explore cultural identity, while Sleaford Mods continue to hone their lacerating observations of contemporary Britain on a new self-titled EP. In America, meanwhile, Moses Sumney’s “Rank & File” and Lonnie Holley’s “I Woke Up In A Fucked Up America” have responded equally forcefully to social and cultural upheaval. Holley, the 68 year-old experimental musician, has described MITH – his new album – as a work of “concrete and tears; of dirt and blood; of injustice and hope”. ‘Hope’ seems a critical word here: what use are demonstrations or protests without the possibility that they will, in the end, achieve a positive outcome?

It is a sentiment, you might suspect, many people also expressed 50 years ago – during another period of uncertainty and disruption. This month’s Uncut – on sale Thursday but you can have a copy sent to you FOR FREE directly at home – digs deep into 1968, where the release of Jimi Hendrix’ Electric Ladyland provides us the opportunity to survey the extraordinary events of that era. With help from Hendrix’s collaborators, friends and confidants, Peter Watts has written a typically detailed and fascinating account of the album’s origins and its place in the wider cultural and social landscape. “There was turmoil across the world and everybody knew that was part of the landscape,” Jack Casady from Jefferson Airplane tells Peter. “Nobody tried to avoid it, it was the context.”

Peter has also assembled a crack list of 30 albums from ’68 and thereabouts that, like Electric Ladyland, were attuned to the wider social and political tensions. We hope you agree with our list: but by all means drop us a line at uncut_feedback@ti-media.com with your own suggestions.

Elsewhere in this issue, you can read new interviews with Soft Cell, Spiritualized, Richard Thompson, Mudhoney, The Beach Boys, Candi Station, the most excellent Garcia Peoples and more. We discover all about two brilliant new collaborative projects – Big Red Machine, from The National and Bon Iver, and Harmony Rockets, from Mercury Rev and folk guitarist Peter Walker. There’s Aretha Franklin, Nick Mason and also the inimitable Paul McCartney – back at the Cavern (or a Cavern, more precisely).

There’s also some excellent new music to share on our free CD – including Low, Beak>, The Other Years, Christine And The Queens, Swamp Dogg and Oliver Coates. But for now, I’ll leave you with a quote from Richard Thompson who, among many other things in our wide-ranging new interview, offers some reflections on songwriting that seem fortuitously apt. “You can’t fail to reflect your own morality in what you write,” he tells Tom Pinnock. “It has to be in there, and I know it is. But I don’t like people beating me over the head with their beliefs, I find it repulsive, so I try not to do it to other people. I hope what I do is non-dogmatic and subtle. My songs are about the human heart and the human condition.”

Enjoy this new issue of Uncut.