Our latest special tells the whole Genesis story: Every lineup! Every album! The solo careers and beyond! 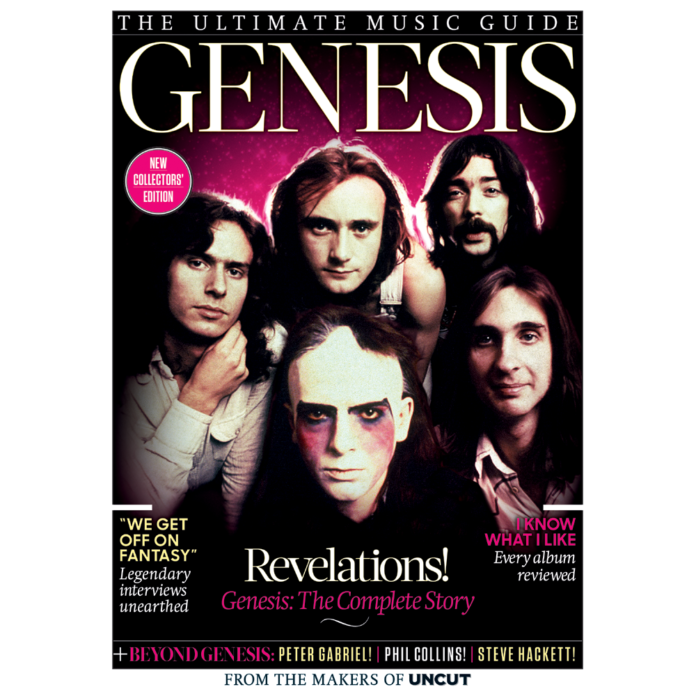 Summer 1978. Genesis have survived the departures of Peter Gabriel and Steve Hackett. They have, in fact, just played a mammoth gig in the grounds of Knebworth House to 100,000 people. Phil Collins, though, still feels he has to defend the evolutions of his remarkable band. “You can’t expect us to stay neat and tidy,” he tells the man from the Melody Maker. “We’re not a neat, tidy band. We have to take chances.”

Uncut’s latest Ultimate Music Guide is dedicated to that remarkably untidy band: an ambitious survey of the entire, brilliant career of Genesis – from prog shapeshifters to stadium gods. It’s on sale in the UK on Thursday, but you can order a copy of the Ultimate Music Guide: Genesis from our online shop now. Within its pages, an epic musical saga unfolds, over multiple chapters, in which outlandish, seemingly disjointed ideas are propelled along with virtuosity, gusto and a heroic disregard for normal rock’n’roll practice. That could also be a description of any number of individual Genesis tracks, of course, but it works pretty neatly as a summary of their storied career. The adventure begins within the rarefied environs of Charterhouse School, some 50 years ago, and ends, at least for now, in a New York hotel suite.

It is there, in September 2014, that Uncut encounters Phil Collins and Mike Rutherford, contemplating the history of their band on the occasion of a suitably expansive boxset, R-Kive, being released. “When I joined the band in 1970, Genesis was a band of songwriters desperate to write hits as well as good songs,” Collins tells Uncut’s Michael Bonner. “They weren’t going to sell out to do it. There is a huge jump from ‘Supper’s Ready’ to ‘Illegal Alien’, yeah. But I think of it in simple terms. Look at what you read when you’re 20 – like The Hobbit – then look at the books you’re reading 20 years later, or what kind of music you listen to, or what kind of clothes you wear. Because there’s a change. You grow up, that’s part of it.”

The Ultimate Music Guide: Genesis, then, seeks to explain the whole shapeshifting brilliance of the band. We’ve delved deep into the archives of NME and Melody Maker, finding interviews with the members that have languished unseen for decades. You’ll see characters emerging and plans being formulated, key figures stepping in and out of the spotlight. A career path being mapped out that does not always appear obvious, but which incrementally builds Genesis into one of the biggest bands of their era.

Alongside all these revelatory interviews, we’ve written in-depth new reviews of every single Genesis album, from their 1969 debut right up until 1997’s Calling All Stations, stopping off at all auspicious points in between. We’ve also investigated the significant solo careers: not just of Peter Gabriel and Phil Collins, but of Steve Hackett, Anthony Phillips, Mike Rutherford and Tony Banks, too. It’s a tricky tale, but an endlessly rewarding one.

“If our present success continues, we’ll be in the situation where we can realize most of our ambitions in music,” Peter Gabriel tells Melody Maker in 1973. “I hope what we do will be completely new.”