"There’s blood and guts and disagreements still to this day…" 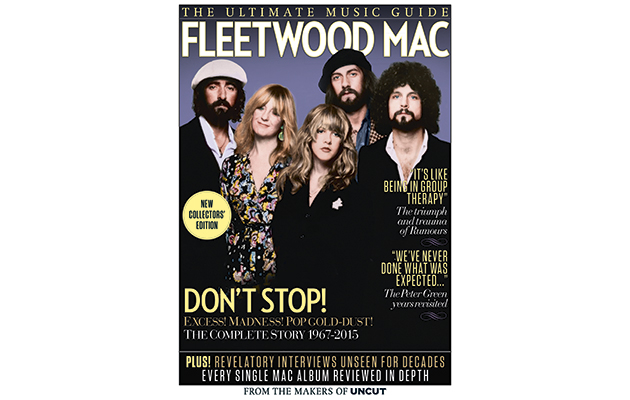 Early 1969. California has been hit by a series of destructive floods, so bad that the international telephone operator is sceptical a connection can be made between London and Los Angeles. When the call goes through, however, the NME’s Nick Logan has a few demanding questions for the first leader of Fleetwood Mac, Peter Green. One is how Green’s band will sustain their reputation as blues purists in the wake of a big hit single, the expansive “Albatross”. Will their next single be another change from what their fans have come to expect?

“I don’t really care,” says Green, yawning. “I never have done really. We’ve never done what was expected of Fleetwood Mac – we’ve always done the opposite. We just do what we want to do.”

Thus begins the remarkable story of Fleetwood Mac – a saga unparalleled in rock, as our new Uncut Ultimate Music Guide dedicated to the band makes clear (on sale in the UK on Thursday Sept 10, but available to order now at our online shop). Over the next four and a half decades, the band’s history has often read like an infinite series of surprise plot twists, where radical upheavals arrive with every new album. Key members come and go, lost to religious cults and mental breakdowns, victims of multiple romantic traumas. Musical directions and locations change as frequently as the lineup: the blues evolve into the apotheosis of sophisticated pop; and a remote Hampshire commune is swapped for the LA highlife.

As the revealing features collected in this Ultimate Music Guide prove, the journalists of Uncut, NME and Melody Maker have been alongside Fleetwood Mac every step of the way. They documented the rise and fall of Peter Green’s band, the emergence of Christine McVie, the transitional lineups of the early ’70s, the dramatic arrival of Lindsey Buckingham and Stevie Nicks, and the glory and devastation that soon followed. “Being in Fleetwood Mac is more like being in group therapy,” noted the mostly redoubtable Mick Fleetwood in 1977, as he contemplated the seismic impact of “Rumours” and laid bare – not for the last time – the private lives of its key players.

Our Ultimate Music Guide, though, focuses on Fleetwood Mac’s extraordinary music as much as their intimate affairs. To that end, we’ve commissioned new, in-depth reviews of every single one of their albums, from lost gems to some of the biggest-selling releases of all time. Like everything about Fleetwood Mac, it makes for an uncommonly long and complicated story, but one that is never less than compelling.

“Looking back, it’s like listening to war stories,” Mick Fleetwood told Uncut in 2002. “But you have to remember there were people yelling in pain with their legs shot away. There’s blood and guts and disagreements still to this day. But that’s what makes it mean a shit.”

Meanwhile, in other blood and guts and disagreements news, the third volume of our History Of Rock series is also on sale this Thursday, and in stock at our shop now. The year in focus is 1967, Jimi Hendrix is on the cover, and I’ll write more about it in a few days’ time. For now, please enjoy the herculean reviewing shifts Tom Pinnock pulled at last weekend’s End Of The Road festival for us. Click for full reports on The War On Drugs, Future Islands and Jessica Pratt, Sufjan Stevens, Sleaford Mods and Euros Childs, Low, Tame Impala and Fuzz, Pond, Ought and Gulp.