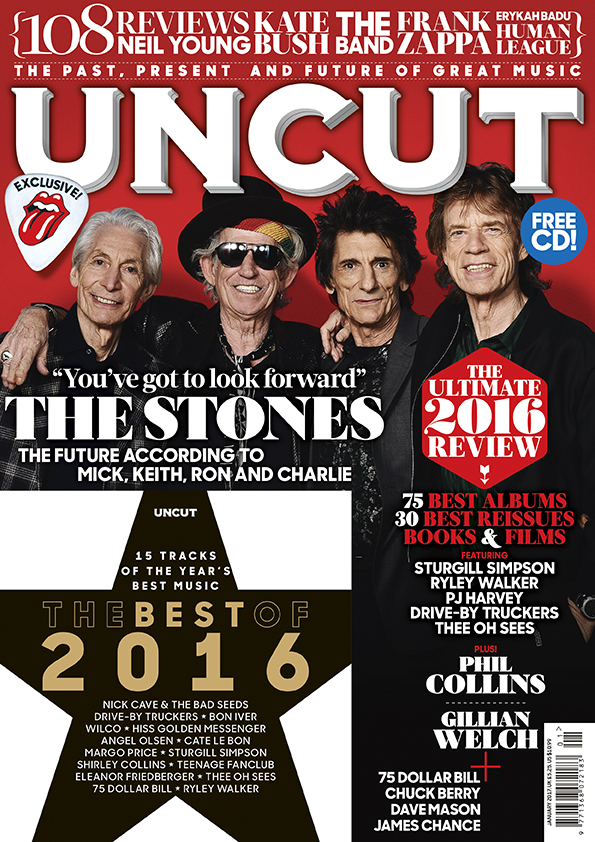 At the end of a momentous and confounding year for music and the world, it is reassuring to cling to a few certainties. As their peers departed, and their songs were used as anthems by a victorious Donald Trump, this month’s Uncut cover stars The Rolling Stones appear, as ever, at a lofty remove from the mortal scrum. For our new issue (on sale today in the UK), Uncut were blessed with a level of access to the Stones that’s unprecedented in recent times.

Come with Michael Bonner to Boston, then, as he spends a very special night with the Stones, and finds them looking resolutely ahead, even as they revisit the blues influences of their youth. Keith has had compliments from Dylan about his new trainers. Mick has loads of new songs. Ron loves being used as “the conduit”. And Charlie is thinking about Brian Jones, and how he would have loved this 23rd Stones studio album. “You can’t celebrate the future,” as the sage Keith Richards puts it; his timing, as ever, impeccable. “You’ve got to look forward and hope there is one!”

As it’s nearly 2017, though, we hope you’ll also allow us a little retrospective contemplation, as we round up the finest albums, archive releases, films and books of the year. There’s a strong piece from David Cavanagh, too, in which he tries to make clear-eyed sense of the year’s appalling losses. “The shock of losing Bowie knocked 2016 entirely off its axis,” he writes. “From that day forward, nobody’s death – not in music, not in sport, not in comedy, not in daily life – would be judged as an individual tragedy.

“Instead it would be viewed as more incontestable proof that 2016 was a year like no other, a year with a hex on it, a year gone rogue.”

Still, our Top 75 new albums list reveals that, in spite of everything, 2016 turned out to be an uncommonly rich year for music, as Laura Snapes elucidates in an essay that accompanies the chart. For the whole rundown of essential, reassuring and surprising records, you’ll have to buy the mag. But in the meantime, here’s a little teaser: this is the far-out way our countdown starts…

74 Melt Yourself Down – Last Evenings On Earth (Leaf)

71 The Comet Is Coming – Channel The Spirits (Leaf)