Heavy riffage: our latest special is in shops from Thursday, May 10 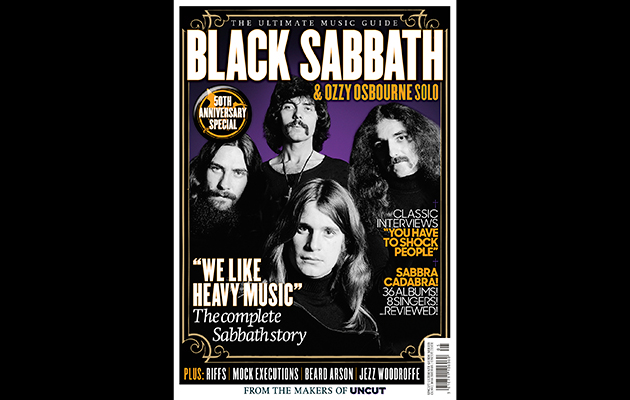 When Black Sabbath closed the final performance from their The End Tour, in Birmingham on February 4 last year, you could be forgiven for wondering whether that was really the last we’d hear of Ozzy Osbourne and his musical cohorts. After all, here was a band who had come back from the brink several times in the past – Ozzy himself had embarked on a solo farewell jaunt in 1992.

But if the peal of a familiar church bell has definitely tolled the end of Black Sabbath – and those monolithic riffs are no more – then at least it is possible to celebrate the masters of metal in all their infinite glory in our latest Ultimate Music Guide – which goes on sale this Thursday, May 10.

As you can imagine, it features classic interviews from the archives of Melody Maker and NME complemented by extensive new reviews of every Sabbath album, every Ozzy solo album, miscellanies and more. You can buy a copy from our online store by clicking here.

Here’s John Robinson, who edited this one, to tell you all about it.

“Not everyone’s first thought, of course, but the origin story of Black Sabbath is essentially a romantic one. Whereas the beginnings of heavy contemporaries like Led Zeppelin and Deep Purple speak of professionalism, of scouting the scene for strong players and likely collaborators, those of Black Sabbath feel endearingly haphazard.

As you will discover as you read through the extraordinary archive interviews and affectionate new critical writing which makes up this new Ultimate Music Guide, the story of Black Sabbath and Ozzy Osbourne is a rags to riches yarn. Namely how four pot smokers from an unpromising part of Birmingham turned their obsessions – heavy music; not working; smoking pot – into one of the most influential, charismatic and commercially successful bands of the late 20th century.

“’Usually in bands you get two blokes who stick together and two others, but it’s not like that with us,’ Ozzy Osbourne told NME’s Nick Logan in 1971. ‘We’re all four together, like brothers. And that’s right because you have four people creating the sound.’

“That sound was collaborative, loose and darkly groovy. But as with brothers, there were serious fights along the way as it got made. And yet, as Ozzy’s path diverged from Sabbath’s, the singer trading on his dangerous reputation to become a huge star in the US, guitarist Tony Iommi fought to keep something like his original band intact – a tangled story, with many singers, which sailed close to rock parody. When the original band – or three-quarters of them – reformed in 2013, it brought to this doomy and aggressive band a blessed kind of symmetry.

“What made it all worth it was the extraordinary music made along the way – which we celebrate with in-depth new reviews here. From the dark and frightening intimations of their debut album to the underground vibrations of the follow-up, Paranoid, Sabbath’s sound was a heavy, powerful swing with riffs for every occasion. When Tony Iommi downtuned his guitar for third album Master Of Reality, he set in motion a sound which spawned an entire musical genre.

“This magazine follows the band on every step of their journey, from the debut to 13, and the ongoing career of Ozzy Osbourne, who provides an exclusive introduction to the mag. We hope you enjoy it.