Band set to tour with replacements 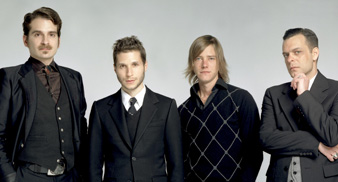 Interpol bassist Carlos Dengler has quit the group, the band have confirmed.

In a mailout to fans, the remaining bandmembers explained that Dengler had contributed to the group’s recently completed fourth album, but would no longer continue his role in Interpol.

“After the completion of the album, Carlos informed the rest of us that he would be leaving the band. He has decided to follow another path, and to pursue new goals,” they wrote.

“This separation is amicable, and we whole-heartedly wish him great happiness and success. We will remain, as always, deeply respectful fans of this blazingly talented individual.”

Dengler now looks set to work on soundtracks, the likes of which he has previously showcased at Carlosdengler.com. Interpol went on to say the band will tour with a series of replacements for the bassist.

“We can tell you that we have some very exciting new recruits joining us on the road. So stay tuned – we will promptly be revealing the identities of these illustrious players,” they explained.

The band’s new album was recorded at Electric Lady Studios, New York, and mixed with Alan Moulder at Assault And Battery, London.