Inside the new issue of Uncut… 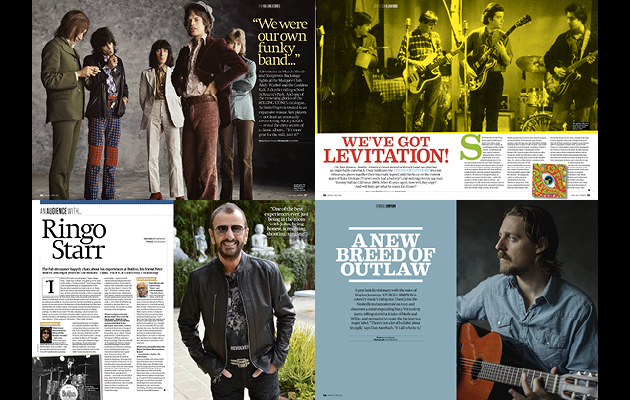 Is history speeding up, or am I just getting older? I doubt I’m the first man of a certain age to have a minor existential crisis triggered by an album reissues programme. It’s been caused these past few weeks, though, by reviewing a couple of albums for the new issue of Uncut (officially out today in the UK) that I wrote about first time round – and not, it seems, that long ago.

One is the debut by the Vancouver collective, Black Mountain, whose “Druganaut” was a key part of the first CD of new psychedelia I compiled for Uncut, “Comets, Ghosts And Sunburned Hands”. “Black Mountain”, amazingly, came out in 2005, hence the tenth anniversary deluxe reissue.

The second is our Archive Album Of The Month, Michael Head’s “Magical World Of The Strands”., a kind of opiate folk record that relocates the spirits of Arthur Lee and Tim Buckley to 1990s Liverpool. Head’s story is a spectacularly messy one, and various true believers have been trying to make him famous – with his first band, The Pale Fountains, then repeatedly with Shack – for three decades now, without much in the way of success. “The fate of Michael Head, elusive genius with few contemporary equals, remains uncertain,” I wrote in NME 18 years ago, when The Magical World first came out. “As this album once again so conclusively proves, he deserves the world.”

With the likes of Mick Head – and, indeed, Uncut’s cover stars this month, The Rolling Stones – it’s tempting, as storytellers, to repeat the myths and circumnavigate the actual music, not least because music is often substantially harder to write about. I tried this time, though, to contextualise Head as part of a deep and transporting musical tradition, rather than as a chemically-adjusted outrider of Britpop. And in a similar spirit Mick Jagger, not always the keenest to anatomise his own work, has given us a revealing interview about the making of one of his greatest albums, “Sticky Fingers”.

Elsewhere in the issue we have the terrific Jim O’Rourke interview that I wrote about last week; an exclusive inside story on the 13th Floor Elevators reunion; a piece about the radical visions of Hipgnosis, featuring insights from Robert Plant and Nick Mason; plus new interviews with Sturgill Simpson, James Taylor, The Blockheads, Jah Wobble and one Ringo Starr. In reviews, you’ll find Sun Kil Moon, Richard Thompson, Jamie xx, Leon Bridges, Kacey Musgraves, Rickie Lee Jones, Robin Gibb and Little Richard. Oh, and there’s an interview with a lost ’70s LA act called Smokey (the singer almost replaced Iggy in The Stooges) that I can’t recommend strongly enough.

Smokey’s singles were mostly so obscure, for various amusing reasons, that they’ve rarely been heard since they were made. “Sticky Fingers”, though, has been played a few times in the last 44 years by most of us, with one notable exception…

“I have never listened to it, probably since it was recorded, since the playback sessions…I never listen to them again,” says Mick Jagger. Forty-four years: what happened there? Back in the blink of an eye…