(After) was recorded in a church in Utrecht during last year's Le Guess Who? festival 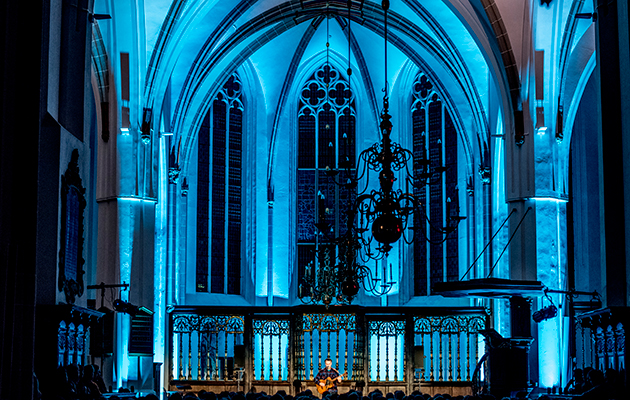 Phil Elverum AKA Mount Eerie will release a new live album called (After) on September 21.

It was recorded on November 10 last year at the Jacobikerk, a 13th century gothic church in Utrecht, during Le Guess Who? festival.

Hear a track from it, “Soria Moria”, below:

Writing about the live performances that followed the release of his grief-stricken 2017 album A Crow Looked At Me, Elverum says: “I was lucky to get to perform these songs in very well suited and beautiful rooms, nice theaters and churches, to kind and supportive listeners. The concerts ended up being something beyond strange, macabre, gawk-shows. I don’t know what they were exactly. Just strangers gathered in beautiful rooms to pay close attention to one person’s difficult details, and to open up together, quietly. They have been the most powerful shows of my life, no question.

“Even so, every time it was clear that the audiences shared the same apprehensions that I had. After the first song, every time, there was a palpable hanging question in the air: “should we clap?”. It’s a good question. What is this? Is it entertainment? What is applause for? What kind of ritual is this? Many close friends have still not listened to the records or come to a concert. What, beyond pain, is embodied here? I don’t know exactly what my job is, traveling around and delivering these feelings. The concerts in 2017 and 2018 have been unusual, unexplainable, and great.

“The best one was at Le Guess Who? festival in Utrecht, Netherlands on November 10th, 2017. Nobody was supposed to be recording these shows but fortunately someone didn’t get that message and this beautiful recording of that show has surfaced.”