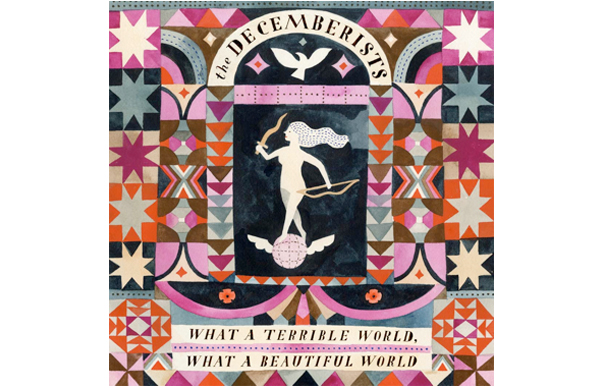 The Decemberists have shared a new song, “Make You Better“. Scroll down to hear it.

It is the first track to be released from their forthcoming album What A Terrible World, What A Beautiful World.

The band will also play seven shows in the UK this February as part of a wider European tour to promote the record.

Frontman Colin Meloy recently announced the album by busking in front of a painted mural of the cover in the Brooklyn neighbourhood of Williamsburg.

The What A Terrible World, What A Beautiful World tracklisting is:

According to Meloy, the new album – the band’s seventh – was a result of a series of informal sessions. “Typically we book four or five weeks in the studio and bang out the whole record,” he explained in a statement. “This time, we started by just booking three days, and didn’t know what we would record. There was no direction or focus; we wanted to just see what would come out. We recorded ‘Lake Song’ on the first day, live, and then two more songs in those three days. And the spirit of that session informed everything that came after.”

What A Terrible World, What A Beautiful World is due to be released on January 19.

The Decemberists will play: