US rock survivors Mark Lanegan and Greg Dulli team up 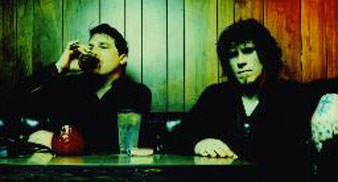 Two of the biggest names from the grunge era, Afghan Whigs’ Greg Dulli and Screaming Trees’ Mark Lanegan, have joined forces on a new five-track EP, A Stitch In Time.

The lead track on the EP is a hypnotic cover version of the Massive Attack song ‘Live With Me’ (written by and featuring soul legend Terry Callier).

The full track listing for A Stitch In Time is:

‘Live With Me’ was one of the highlights of the August gig by Twilight Singers, Greg Dulli’s new band. It was at that gig that Lanegan joined Dulli and Co onstage as guest vocalist.

The collaboration proved such a success that the grunge twosome, together named The Gutter Twins, are currently working on a full length album. They aim to have the album completed by early 2007.

In the meantime you can catch the Twilight Singers on a brief tour of the UK, after they complete a mammoth 19-date US tour in October. Mark Lanegan will be joining them.

The EP is released through One Little Indian on 4th Dec. The tracks will be available for download through iTunes on Nov 20th.