Grace Slick: “I enjoyed every trip I had!” 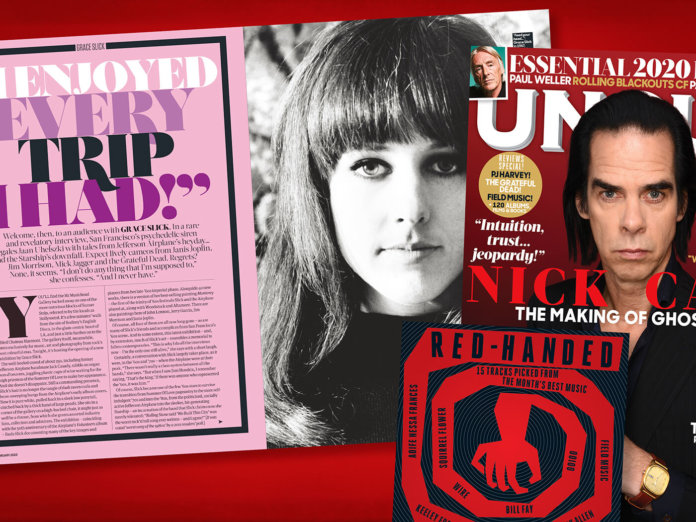 Talking to Uncut’s Jaan Uhelszki, Slick ponders the fact the she’s now outlived most of her contemporaries from the underground rock scene. “Sometimes I wonder why, especially since my idea of heaven was to get really drunk and drive a car real fast,” she says. “I took lots of drugs. I’ve never eaten right. I’ve never exercised  a day in my life. My idea of exercise was fucking. But  I don’t do that any more, so I don’t do any exercise. I’ve got about four deadly diseases but I’m still walking around. My doctor looked at me the other day and he said, ‘God, you’re a tough broad.'”

Do you think some of those losses – Hendrix, Morrison, Joplin, Cass Elliot, Brian Jones – could have been avoided? “Well, nobody back then wanted to die. Back in the ’60s, you didn’t go to rehab. That was for people who broke their legs skiing. We didn’t even consider going. The trouble was, there was such a radical shift from the ’50s to the ’60s, we hadn’t figured out how to live in this new world. If you were in a rock’n’ roll band in the ’60s, the only thing you couldn’t do was kill people. Everything else was acceptable. You’re being paid to travel around the world and people admire you because you’re a rock’n’roll star. You’re young, you’re relatively healthy. Trust me, you’re not trying to kill yourself – you’re just having fun. I don’t remember anyone being miserable. Sure, Janis had issues, but nobody was suicidal. You could screw anybody and take any drugs you wanted. The only downside was we didn’t measure the drugs we took.  A lot of us died because we weren’t good with the chemistry. When Janis died, Marty [Balin] stopped using drugs. I’m stupid, I always thought when these people died, it wasn’t going to be me. But that turned out to be true.

“Fortunately, I enjoyed every trip I had. It could’ve gone the other way, because sometimes it does. I would not take acid now… At the time I took acid I had a job, my parents were healthy, everything was fine.  I didn’t flip out. But it can get gnarly. So it is a blessing if you’re able to take it in the right framework.”

Talking of Janis Joplin, Slick says: “People who write books really get Janis wrong. The woman I knew would cackle, she’d laugh so hard, and was fun to be with. Very vocal, very outspoken, very funny. Texas women tend to be like that. They called us fire and ice. I was the ice and she was the fire. But I think she is more of a symbol of those times than I. She had more style. My voice is OK, but she really pushed the envelope.”

You can read much from Grace Slick in the latest issue of Uncut, in shops now!