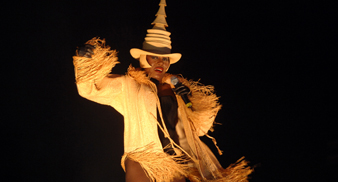 Grace Jones closed the final night of the Lovebox Festival tonight (July 18) with a career-spanning set.

The Jamaican-American singer, who was 25 minutes late, pulled in a huge crowd for a spectacular performance on the Main Stage at Victoria Park which saw her make several costume changes as she reeled off tracks stretching right back to her 1977 debut album ‘Portfolio’.

Arriving onstage at the drop of a huge black curtain, Jones greeted the crowd on a raised platform in the middle of the stage wearing a black jacket and a facemask with white feathers sticking out of the top, as she kicked off her show with ‘Night Clubbing’.

Introducing herself after the song she said: “Hi babies, hello London,” before she pointed out a ferris wheel beyond the stage, adding: “Looks like I need to go on that ferris wheel over there looks like fun. But I’d rather be here with you.”

She then launched into ‘This Is’ from her most recent 2008 album ‘Hurricane’ before she turned the clock and stepped back on the raised platform for ‘My Jamaican Guy’ from her 1982 album ‘Living My Life’.

Throughout the show she wore several hats and face masks and danced around a poll on a spinning turntable.

At one point she returned to the stage dressed in a sparkly black jacket and white top hat with a glass of red wine before she introduced ‘La Vie En Rose’, her reworking of French singer Edith Piaf‘s signature tune, which featured on Jones’ 1977 debut ‘Porfolio’.

The biggest cheer came for her own signature tune ‘Pull Up To The Bumper’, which saw Jones strut down to the barrier and shake hands with several members of the crowd as she sang before they were showered in ticker tape.

She then sang her Roxy Music cover of ‘Love Is The Drug’ under a giant laser beam just 24 hours after Bryan Ferry and his band played the same track.

“I did want to do two more songs,” she said acknowledging her late arrival. “But we are waking up everybody who is asleep already.”

She then closed her set with ‘Dance To The Rhythm’ while hula-hooping all the way through the track and finally offstage.

Earlier, Kele Okereke made a surprise appearance during Hercules & The Love Affair‘s performance singing a new track entitled ‘Step Up’ which is set to appear on their forthcoming album.

The band also played ‘Blind’ and a host of other new tracks while band leader Andy Butler, who performed bare chested wearing a sailor cap and smoking an artificial cigarette, joked: “It looks like I’m smoking a tampoon, but it’s not, I’m actually trying to quit smoking.”

Later, Peaches shocked everyone when the electro-clash star arrived onstage with her leg in plaster as she was wheeled around in a pink wheelchair by a naked woman with a penus.

“This is no joke,” she declared. “But I couldn’t not come to Lovebox.”

Amazingly despite spending much of the time in her wheelchair and hopping around onstage, she attempted to balance her leg on an amp at certain points as she sang the likes of ‘Billionaire’, ‘Boys Wanna Be Her’ and ‘Shake Your Dix’ before she brought on a massive troupe of dancers dressed in drag for closer ‘Fuck The Pain Away’.

Later Hot Chip kept the party going performing a host of hits from their back catalogue including ‘Over And Over’, ‘One Pure Thought’, ‘One Life Stand’, recent single ‘I Feel Better’ and ‘Ready For The Floor’.

Signing off Joe Goddard told the crowd: “Have a good time and be careful, drink water between pills.”

Over on the Gaymers Stage, New Young Pony Club got the crowd dancing to tracks from second album ‘The Optimist’ alongside old favourites such as ‘Ice Cream’. Earlier We Have Band also performed tracks from their recent debut ‘WHB’.

Back on the ‘Main Stage’, former NME Radar Tour headliners Hurts called on their customary opera singer for backing vocals as they performed tracks from their forthcoming album ‘Happiness’.

Singer Theo Hutchraft, who was wearing a black suit throughout, bantered with the crowd about wearing the wrong clothing in the baking afternoon sun as the band played the likes of recent single ‘Wonderful Life’ and ‘Blood, Tears & Gold’.

Closing with ‘Better Than Love, Hutchcraft told the crowd: “We’ve got one more song and then we’re going to put our shorts and t-shirts on. Thanks very much Lovebox .”