Eugene Hutz takes time out from film-making with Madonna 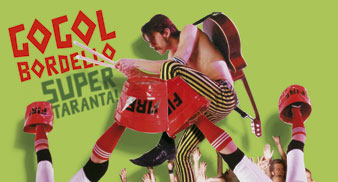 Gogol Bordello are set to return to British shores this spring for a full headlining tour.

The jaunt, in support of the gypsy-punks’ new single “American Wedding”, out on March 24, will call at Academy venues around England, kicking off on March 28 in Newcastle.

Before the tour, frontman Eugene Hutz will attend the Berlin International Film Festival in February for the premiere of ‘Filth & Wisdom’, directed by Madonna, in which Hutz stars.

Gogol Bordello will call at: