Glastonbury Kicks Off In Wet Conditions 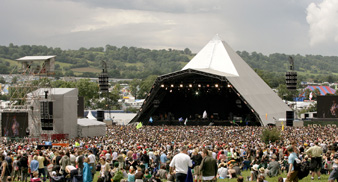 The first day of this year’s Glastonbury festival has kicked off today (June 27), with a performance from Kate Nash on the Pyramid Stage.

The singer-songwriter took the stage at 10.50am to officially open the event.

However, a number of acts had performed yesterday (June 26), including The Rascals, fronted by The Last Shadow Puppets‘ Miles Kane, who played on the Left Field Stage at 6.30pm.

Though forecasters are predicting the weather will be better than last year’s mudbath, substantial showers fell on the site last night and light rain is forecast for later on today.

Festival-goers also suffered delays getting on to the Somerset site when a fire broke out in a nearby scrapyard, causing the nearby A37 to be closed.

Acts set to perform later on today include Franz Ferdinand, Edwyn Collins, John Cale and The Blockheads, while Kings Of Leon will also headline the Pyramid Stage.

Stay tuned to Uncut.co.uk and NME.COM for the latest news from the festival.