Get set for Kiss: the comic book heroes 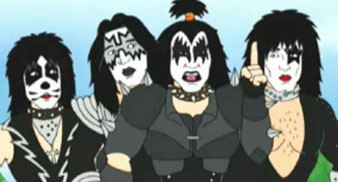 Although this is not the first time the flamboyant band have been animated, this will be the first time founding members Gene Simmons and Paul Stanley will have full creative control.

Under the name Kiss Catalog Ltd, Kiss will produce their own original comic-book characters in multi-formats, including online, on television and for use in merchandising.

Kiss have high ambitions for the new venture, they intend to produce the ‘largest comic book ever published’ with their first outing, “Kiss 4K.”
The book follows the story of Simmons and co’s transformation from rock stars into eco-warrior spirits, and will be published as a three-feet tall comic-book, priced at $50.

Kiss band members have said that they will be involved in all day-to-day decisions about the co-venture with Platinum.
Platinum chairman, Scott Rosenberg explained that the new deal will ingrain comics into the Kiss legend: “The Kiss comics that have come out were licences; they weren’t truly part of the mythology. This is all of us working together. [Simmons and Stanley] care about every panel of every comic and how an image looks on a shirt.”