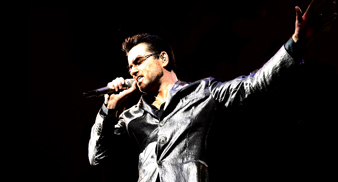 His first UK date will be on June 9, at the brand new Wembley Stadium, making him the first artist who will appear there.

The first band to appear there will be rock trio Muse the following week.

Rumours were abounding that Michael’s Wembley date was to have been a one-off Wham reunion with former bandmate Andrew Ridgely, but with the announcement of this full solo tour, rumours alas are all they are.

George Michael has played at Wembley several times in his career including the Wham farewell concert in 1986 and at the Freddie Mercury tribute concert in 1992.

Alex Horne, MD of Wembley Stadium, commented on Michael’s return to Wembley, saying: “It’s fantastic news that George Michael is to play Wembley Stadium’s opening concert. He’s no stranger to this great stage having performed at the old stadium both with Wham! at Live Aid and also as a solo artist, so this is a fitting first gig in the new stadium.”

The Summer tour announcement follows an incredibly successful professional year for the singer. Last September, he performed a highly acclaimed European sell-out tour, “25 Live”- his first in 15 years – on the back of his number one album, ‘Twenty Five’.

Tickets for all the new UK dates will go on sale at 10am tomorrow (March 8), from all the usual ticket outlets.

You can see George Michael at these UK venues in June: