Gene Simmons Has Public Row With US Music Industry Mogul 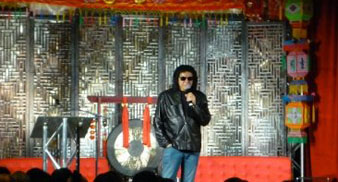 Simmons and Lefsetz were both Keynote speakers on the opening day of the 5 day music conference and showcase in Toronto (March 12), with Leftsetz, a music consultant and commentator taking offence at the way the Kiss singer had used his panel to ‘vulgarly’ speak about money.

Simmons used his morning Q&A panel, for which Kiss fans could buy tickets to advertise his new endeavor Simmons Records, a new partnership with Universal Records to develop Canadian talent and exploit new “stars who are bigger than the songs they sing.”

Lefsetz in his afternoon keynote speech called Simmons a “sell-out” and after emails were exchanged, an impromptu ‘face-off’ style panel was set up in haste at CMW’s base the Fairmont Royal York Hotel.

To all intents and purposes, Lefsetz won the ‘argument’ face to face, saying afterwards: “KISS will continue to tour. Gene will concoct whatever circus is necessary to put asses in the seats. Whether it be another reunion or an execution on stage. But the band will still be way past its prime, will still be has-beens, will still garner no respect in the world of music. The reason being primarily Gene himself. Such a hateable guy is going to find it impossible to garner any respect.

Furthermore, Gene doesn’t seem to realize the Internet allows the public to fight back. The stories filling up my inbox would make Gene cry. But just
watch this one for illustration. The fireworks reach a frenzy at 1:48“

Simmons, although meant to stay for the rest of Canada Music Week, checked out of the hotel immediately with a “no comment” to press.