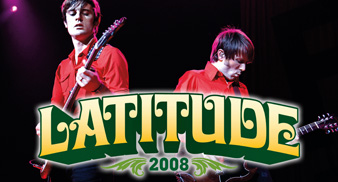 Franz Ferdinand have been revealed as the first headline act set to play this year’s Latitude Festival at Henham Park, Suffolk.

The Scottish rockers fronted by Alex Kapranos will take over the main stage with a mixture of familiar Top five hits such as “Take Me Out” and “Do You Want To” as well as new material from their forthcoming third album, which they are currently recording in Glasgow.

This headline slot is Franz Ferdinand’s first big UK gig since playing a sold-out four night run at London’s Alexandra Palace at the end of 2005 and headlining the Carling Weekend in the Summer of 2006 — and will be their only UK festival appearance in 2008.

Of course, Latitude is not just about music, but will also be putting on the best in comedy, films, books, theatre, poetry and cabaret over the three days.

More details about who else will be headlining and what else will be occuring in Southwold this July will be unveiled with the BIG LAUNCH ANNOUNCEMENT which takes place this evening in central London.

Tune back in to uncut.co.uk from 7pm tonight (March 19) when we will have all the details about who will play and how you can get a ticket.

More information about location, tickets etc will be available from the official Latitude website from tonight too: www.latitudefestival.co.uk