Read the Uncut obituary of the Motown legend here 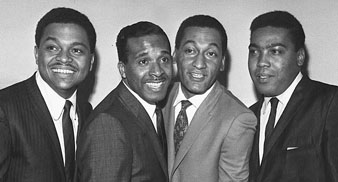 As the chief voice of The Four Tops, the most stable act on the Motown roster, Levi Stubbs was one of soul music’s most distinctive and celebrated singers. Starting out as The Four Aims in 1954, the quartet’s line-up only changed in 1997 after the death of Lawrence Payton. Stubbs himself was forced to retire three years later following a stroke from which he never fully recovered.

After almost a decade’s struggle to hit the big time via releases on Chess and Columbia, The Four Tops signed to Motown in 1963 (label founder Berry Gordy had previously written hits for Stubbs’ cousin Jackie Wilson) and were taken under the wing of the songwriting and production team of Holland-Dozier-Holland. Initially the group recorded jazz standards for the Motown off-shoot Workshop and back-up vocals for early Supremes singles, before the producers took an experimental gamble

Stubbs was a natural baritone but the songs earmarked for the band were fashioned with a tenor lead in mind. The result was Levi straining at his top register, giving the vocal a pleading, yearning effect, best heard on “Baby I Need Your Lovin’” (their first hit), “Bernadette” and “I’m In A Different World”. Arguably, Levi’s style of testifying and putting his emotional pain front-and-centre influenced label mate Marvin Gaye to step out of his hitherto smooth balladeer comfort zone, and also impacted on the work of Otis Redding and even white boy soul shouters like Steve Marriott or Joe Cocker.

In addition to a string of HDH compositions (“Reach Out I’ll Be There”, “Standing In The Shadows Of Love”, “I Can’t Help Myself”), Stubbs and his fellow Tops proved surprisingly adept at interpreting the songs of others; Nat King Cole’s “It’s All In The Game”, Tim Hardin’s “If I Were A Carpenter”, and most remarkably psychedelic poppers The Left Banke’s “Walk Away Renee”.

While other Motown big hitters like Gaye, Stevie Wonder and The Temptations successfully made the transition to more socially aware material in the late 1960s and early 1970s, The Four Tops found it harder to move with the times (although Top Obie Benson co-wrote Gaye’s “What’s Going On”), and apart from an occasional triumph like “Are You Man Enough?”, the theme song for Shaft In Africa, they found themselves stuck on the golden oldies cabaret circuit.

A move to the more disco-minded Casablanca label resulted in another hit, “When She Was My Girl”, in 1980. Stubbs also won plaudits for his role as the voice of a giant flesh-eating plant, Audrey II, in the film version of Little Shop Of Horrors, before the charts came calling again in 1988 with “Loco In Acapulco”, co-written by Phil Collins and the group’s old producer Lamont Dozier.

With the notable exceptions of the Horrors soundtrack and a 1982 duet with Aretha Franklin, Stubbs rarely recorded without the three men he first sang with back in 1954, but his voice was instantly recognisable and as much a part of the fabric of black music as those of Gaye, Wonder, Redding or Diana Ross. Indeed, the only time his own name ever appeared on the front of a record sleeve was Billy Bragg’s 1986 single “Levi Stubbs’ Tears”, a track about the redemptive power of song – something he understood more than most.