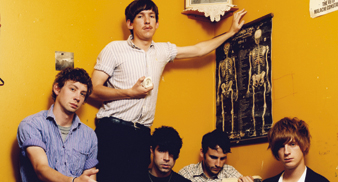 The band, who released their debut album “Antidotes” earlier this year took the chance to criticise Sex Pistols’ John Lydon from the stage.

Before their biggest hit, ”Cassius”, two songs in, frontman Yannis Philippakis told the crowd: “We were in Spain yesterday and we got in a fight with Johnny Rotten, I got handcuffed. This song is dedicated to Johnny Rotten and his meathead friends.”

As well as performing their singles “Balloons” and “Red Sox Pugie”, Foals performed tracks from their debut including “Heavy Water”, “The French Open” and “Two Steps Twice”.

The five-piece closed their set with “Electric Bloom”, which ended with a distorted and echoed scream from Philipakkis.