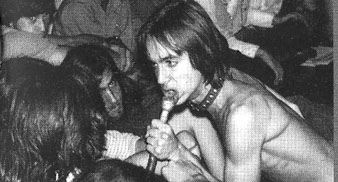 American rock legends Iggy and the Stooges have announced the release of a digitally re-mastered version of their most infamous album, ‘Metallic K.O.’

Consisting of the band’s (original) last ever chaotic live performance at Michigan Palace, Detroit in 1974 (before re-forming in 2003) – ‘Metallic K.O.’’s initial bootleg release in 1976 gained a cult following despite poor quality of sound, and frequent background noises of beer bottles shattering as they were hurled at the band.

The re-mastered version of the album boasts to have corrected the tape-speed error of the initial bootleg copy and the accompanying booklet is filled with commentary of the infamous “Last Ever Iggy and the Stooges Show” that would eventually become part of the punk-rock folklore.

A published essay by the prominent critic Lester Bangs on the chaos that accompanied the band is included in the 12 pages of embossed sleevenotes. He comments: “Metallic K.O. is the only rock album I know where you can actually hear hurled beer bottles breaking against guitar strings.” Another renowned 70s music critic, Nick Kent, calls the album a ‘masterpiece.’

Re-issued with the original LP track list and improved sound, the original recording can now be heard at the correct pitch for the first time; perfect chaos in your living room.

The album is on released on Jungle records on October 1.