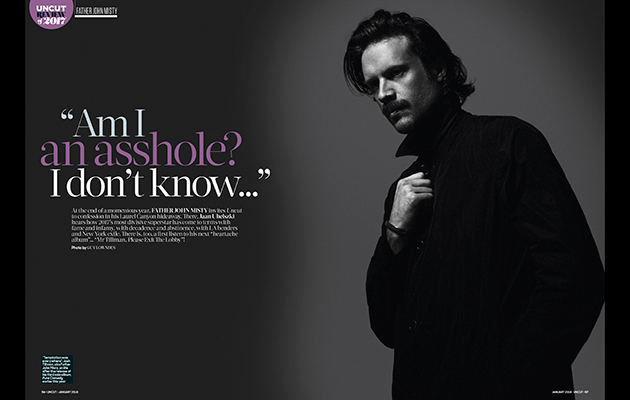 Father John Misty has revealed the secrets of his next album in the new issue of Uncut.

The record, which he describes as “the real I Love You, Honeybear but without the cynicism”, hasn’t yet got a release date. All the same, Josh Tillman was happy to give us a detailed progress report of his follow-up to Pure Comedy.

According to Tillman, songs titles for this new record include “Ouch, I’m Drowning”, “Dum Dum Blues”, “Mr Tillman, Please Exit The Lobby” and “Well, We’re Only People And There’s Nothing Much We Can Do About It”.

“Most of this next album was written in a six-week period where I was kind of on the straits,” he tells Uncut‘s Jaan Uhelszki. “I was living in a hotel for two months. It’s kind of about… yeah… misadventure. The words were just pouring out of me. It’s really rooted in something that happened last year that was… well, my life blew up. I think the music essentially serves the purpose of making the painful and the isolating less painful and less isolating. But in short, it’s a heartache album.”

Quizzed on what inspired the ‘heartache’, Tillman replied: “I think I instinctually understood that if I blew everything up, I could put it back together better than it was. But look, I don’t want to talk about what happened. Maybe in 30 years from now I will. I know that sounds dramatic. But to talk to me about what this album’s about, I’d have to bring other people into the picture who don’t want to be.”

The forthcoming album began almost of its own accord when Tillman played drums on Adam Green’s record last summer. “Jonathan Rado was producing it at this tiny studio. At the end of the day, I asked, ‘What are you doing tomorrow?’ I didn’t have any plans to start making a new record. Jonathan said to come on by, so I went over there the next day and started putting down my songs. And I said to myself, ‘I guess this is happening now.’ It was clear we’re not making demos.”