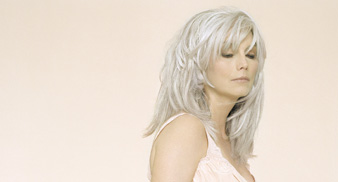 Parsons discovered Harris in a Washington D.C folk club in 1971 and invited her to sing on his 1973 album ‘GP’, but he tragically died in the same year of a drug overdose. She has now recorded the track ‘The Road’ for ‘Hard Bargain’, which addresses her relationship with the singer.

Speaking to Rolling Stone, Harris said of the track: “It’s terrible that Gram died so young, but I’m grateful that our paths crossed. It’s a thank you to him and kind of a tip of the hat to the universe to say ‘I’m still here and I was given all these wonderful things because of that meeting with this person.’ It’s just a reflection.”

Harris has addressed her relationship with Parsons once before, on her 1975 track ‘Boulder To Birmingham’, but said that ‘The Road’ is a very different track.

She said: “‘Boulder to Birmingham’ was written in the throes of deep grief and shock, after losing someone that quickly and unexpectedly. So that was just a way of dealing with it, whereas now, you’re looking back from a great distance with a great deal of affection.”

‘Hard Bargain’ is out now.