Elvis Costello: “I felt like driving the car into a ditch” 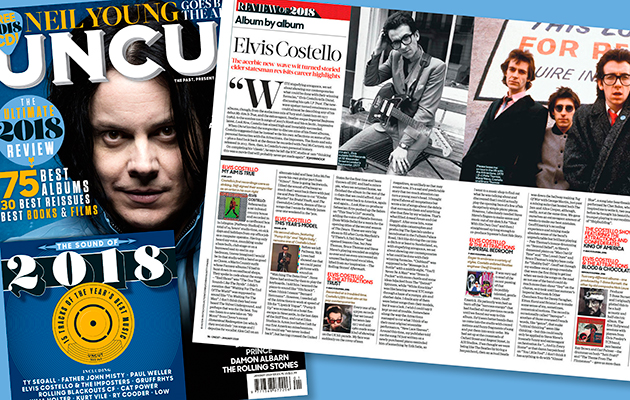 In new issue of Uncut – in shops now or available to buy online by clicking here – Elvis Costello writes exclusively about the making of some of his classic albums, from My Aim Is True to this year’s masterful Look Now.

Recorded at a troubled time, 1981’s Trust targeted Costello’s pop contemporaries. Read what the man himself says about it below:

“Every one of the 45rpm records that we issued between late 1977 and mid-1980 made some kind of showing on the UK hit parade. My face was suddenly on the cover of teen magazines, as unlikely as that may sound now. It’s a sad and predictable story that too much attention can turn a young man’s head. I thought myself above all temptations but wrote a lot of songs about the debris that surrounds them and anything else that flew by my window. That’s what filled Armed Forces and Get Happy!!.

“After some hits, some inexplicable catastrophes and producing The Specials under a laundromat in the Fulham Palace Road, I felt like driving the car into  a ditch or at least to Sunderland, so, with stupefying arrogance, we set about showing our contemporaries what could be done with their winning formulas. “Clubland” was supposed to be “Message In A Bottle” with a middle eight, “You’ll Never Be A Man” was “Brass In Pocket” with more chords and some ideas hijacked from The “Detroit” Spinners, while “White Knuckles” was like hearing several XTC songs through a haze of scrumpy, gin and sherbet dabs. I doubt any of them were better songs than their models, but it was a lark.

“I wish I could say it kept us out of trouble. Somewhere along the way The Attractions managed to cut what I think of as their most original ensemble performance, “New Lace Sleeves”. Around this time, my publisher told me the song I’d just written on a newly purchased piano reminded him of something by Erik Satie, so  I went to a music shop to find out what he was talking about and discovered that I could actually  play the opening bars of a few of his deceptively simple piano pieces. However, I absolutely needed Steve Nieve’s fingers to make sense and music out of my sketch for “Shot With His Own Gun” and then I straightened up long enough to co-produce Squeeze’s East Side Story.”

You can read Elvis Costello’s complete Album By Album feature in the current issue of Uncut, out now.