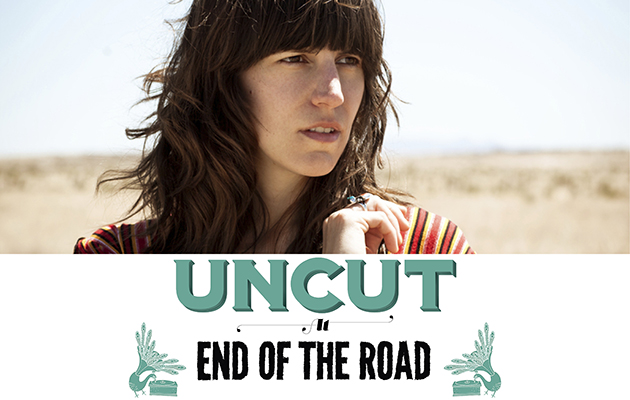 Eleanor Friedberger begins her End Of The Road set with a shameless and endearing overture to the crowd. “I’m gonna get this out of the way so you’ll be the most sympathetic audience in the world,” she says after her bassist and drummer follow her onto the leafy Garden stage. “It’s my 40th birthday and I couldn’t think of a better place to spend it.” Outside of one of indie rock’s finest celebrating a landmark birthday, Friday at EOTR offers much cause for celebration. While many mainstream festivals whine unconvincingly about how hard it is to find female artists to fill out their bills, the Wiltshire weekender has quietly stacked the schedule (and two of its four headline slots) with women.

Friedberger has made her name on a speak-sing vocal that evokes Patti Smith’s keen angles. It’s in full force this afternoon, and even more versatile than usual: she’s sharp on “That Was When I Knew”, and keening on “Evergreen” from the Fiery Furnaces’ EP. She plays a number of Furnaces cuts today, including “I’m Gonna Run”, with its flinty vocals and dissonant runs of guitar, which sets up a fine contrast with her more lyrical solo material. The heartfelt plea of “Sweetest Girl” – “stop crying so I won’t start” – offers sharp relief to the somber bass, and “Scenes From Bensonhurst” is full of bitter recriminations. Lyrical mood aside, she looks delighted as she delivers every lick and growl; even more so when a cake appears from the wings and the crowd sings her happy birthday.

Where Friedberger employs subtlety, Margo Price‘s main stage set is all power. She belts out “Tennessee Song”, and dedicates Mickey Newbury‘s “Why You Been Gone So Long” to the driving drizzle. Her set might be the most pure country moment in EOTR’s history; the crowd take to it tentatively, with a few men in Uncut’s earshot mocking her Nashville pronunciation, but they’re eventually won over by Price’s generous performance. She covers songs by her friends, does a serious vocal turn on Gram Parsons‘ “Ooh Las Vegas”, and capers through “Four Years Of Chances”, a song about a useless bloke who can’t see the prize in front of him. “I don’t put out the shit that gets bought and sold,” she sings on “This Town Gets Around”, confronting sleazy Music City corruption. Price’s debut, Midwest Farmer’s Daughter, released through Jack White‘s Third Man Records earlier this year, made her the first artist to reach Number 1 on the US country charts without making the country radio airplay charts: she’s slowly inverting the genre’s traditional popularity paradigm, as well as winning over a country that’s been notoriously resistant to Tennessee’s twang. Anyone not yet sold should be converted by rollicking “Hurtin’ On The Bottle”, her ebullient closer.

A few hours later on the main stage, Savages make the audience complicit in their terrifying seduction, luring them into their waves of choked noise. Frontperson Jehnny Beth swaggers and whirls her arms during “Sad Person” (so much so that the elbows on her suit appear to have burst from past exertions), and thrusts into every word of “City’s Full“, amplifying its lascivious worldview. “Because you’re so nice we’re going to play you a love song,” she tells the crowd before “When In Love”, which initially comes off more like a threat than a comfort. “But don’t worry because it’s a Savages love song. So it will be kinda loud and exciting. We need you to come closer for this, because it’s cold and we need you to be warm.” The audience edges towards the barrier; close enough to see bassist Ayse Hassan and drummer Faye Milton earn their titles as Savages’ MVPs, not least on debut single “Husbands”, which still sounds like an attempt to pile-drive through the depths of hell, almost three years after its initial release.