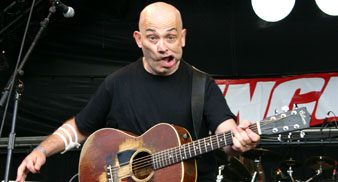 Rock’n’roll protest singer Ed Hamell has announced that he will be bringing his ‘Terrorism Of Everyday Life’ show to London for a two week run this month.

Performing his one-man show at the Soho Theatre from February 12- 23, sometime UNCUT contributor Hamell’s show is full of stories about God, sex, drugs and pizza delivery, accompanied by his Gibson guitar.

Hamell is in town to promote his latest live bootleg album from his ‘Terrorism’ show, recorded at last year’s Edinburgh Festival.

The album is set for release through Ani Difranco’s label Righteous Babe Records on February 11.

More information about the forthcoming album and London shows are available here: www.hamellontrial.com