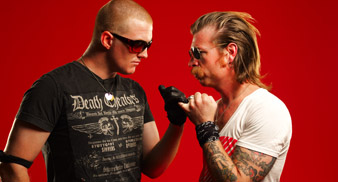 Eagles of Death Metal have announced a UK to coincide with the release of their forthcoming new studio album ‘Heart On’ this Spring.

The band comprising Queens of the Stone Age‘s Josh Homme and Jesse Hughes, will also launch their third album with one of their infamous ‘Ladies Only’ club nights at London’s Soho Review Bar on January 26.

Eagles full tour will then kick off at Portsmouth Pyramids on March 28, ending up at the London Forum on April 8.

The full EODM dates are: