The '65 Tour classic is repackaged, plus a new film rescued from the cutting floor 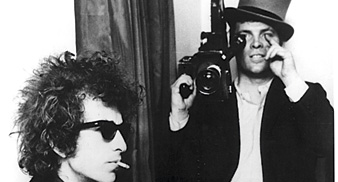 The classic D.A. Pennebaker film of Bob Dylan’s “Don’t Look Back” tour of ’65 is being reissued in a deluxe package on April 30.

The reissue includes an entire disc of unseen footage as well as the original full length film.

The discs are also accompanied by the original 168-page film book and flipbook.

Regarded as a template for all future rock documentaries, “Don’t Look Back” portrays more than just a concert on film; it captures a bit of the spirit of the 60s and one of the poet-musicians whose words and songs defined it.

This digitally re-mastered film follows Dylan on his extraordinary 1965 concert tour of England – his last as an acoustic performer.

The second disc is “Bob Dylan : ’65 Revisited”, Pennebaker’s own look back over his previously unused behind-the-scenes film footage.
“’65 Revisited” brings a fresh perspective of the young Dylan on the road.

Dylan is about to embark on the UK leg of his ‘Never Ending tour’, playing the following venues: