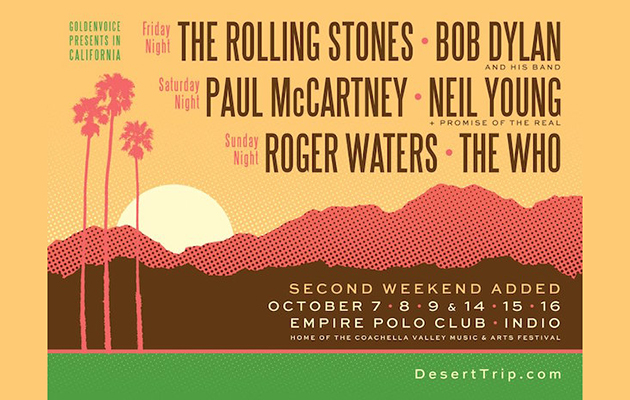 The second leg of the inaugural Desert Trip festival took place in Indio, California over the weekend.

As with the previous weekend, Bob Dylan, The Rolling Stones, Neil Young, Paul McCartney, The Who and Roger Waters all performed.

There were a few changes to the band’s set lists.

Dylan – recently awarded the Nobel Prize of Literature – performed “Like A Rolling Stone” for the first time in nearly three years.

The Rolling Stones honoured Dylan’s award, with Mick Jagger announcing, “I want to thank Bob Dylan for an amazing set. We have never shared the stage with a Nobel Prize winner before. Bob is like our own Walt Whitman.”

According to the LA Times, Jagger also continued his strong line in between song banter. After describing last weekend’s leg as “the Palm Springs retirement home for genteel musicians”, he announced on Friday (October 14), “Welcome to Desert Trip two! They say that if you remember Desert Trip one, you weren’t really there.”

The Stones also substantially mixed up their set from last week, changing seven songs. They also debuted another track, “Just Your Fool“, from their forthcoming album, Blue & Lonesome.

On the Saturday night – October 15 – Neil Young and the Promise Of The Real also changed their set around, introducing “Helpless”, “Alabama”, “Cowgirl In The Sand” and “Like A Hurricane” for this second weekend’s show.

Young once again joined Paul McCartney for a medley of “A Day In The Life” and “Give Peace A Chance” and a ferocious “Why Don’t We Do It In The Road” that – Forbes reports – saw Young break all his guitar strings.

McCartney himself made a few amendments to his set from the previous week, notably an outing for “Got to Get You Into My Life” early on and Little Richard‘s “Rip It Up” during his encore. Apart from Young, McCartney also brought on Rhianna to sing “FourFiveSeconds”, the song they recorded together with Kanye West.

The Who and Roger Waters played on night 3 (October 17), with The Desert Sun reporting that The Who’s set remained unchanged from the previous week. The paper also reports that a pro-Israel group, StandWithUs, announced it would hire a plane to pull a lit banner during Waters’ set saying, “Support Israeli-Palestinian Peace, Not Hateful Boycotts.”