Death Cab For Cutie Get Epic At Latitude 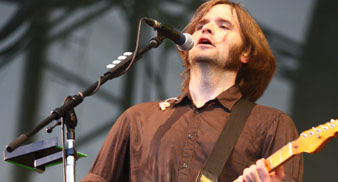 Death Cab For Cutie put in an impressive and popular performance on the Main Stage at Latitude tonight (July 18).

The Seattle indie-rock band, led by guitarist and vocalist Ben Gibbard, took to the stage at 8.00pm (BST) and ploughed straight into a set heavy on extended songs and powerful band interplay.

As well as performing a number of tracks from their recent album “Narrow Stairs”, the band dipped into their back catalogue performing tracks including “Soul Meets Body” and “Transatlanticism”.

The highlights from “Narrow Stairs” included “Cath…” and “I Will Possess Your Heart”, the latter of which, a Can-influenced jam, lasted almost ten minutes .

During the track, Gibbard swapped his guitar for piano after the atmospheric intro.

The group brought the set to a close as the rain started to drizzle down with a mammoth version of “Transatlanticism”.

Stay tuned to uncut.co.uk for all of your Latitude news over the weekend.