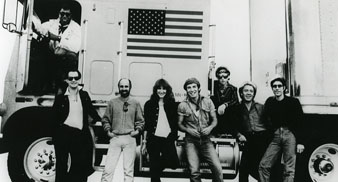 Danny Federici, friend and collaborator of Bruce Springsteen of four decades’ standing, has died in New York City aged 58, following a three-year battle with melanoma. In a statement posted on his website, Springsteen said of Federici that “He was the most wonderfully fluid keyboard player and apure natural musician. I loved him very much. . . we grew up together.”

Federici had taken a leave of absence from the present Springsteen tour last November as he worked full-time on his recovery, though on March 20th, he played accordion on “4th Of July, Asbury Park (Sandy)” at a show in Indianapolis. It turned out to be his final participation an association with Springsteen dating back to the 1960s, when the pair played together in New Jersey – in a 1998 interview with his local newspaper, the Asbury Park Press, Federici recalled seeing Springsteen perform at a venue called The Upstage Club, and poaching him from his then band, Freehold, to join his own outfit. Springsteen and Federici subsequently played together in various guises, including Child, Steel Mill and Dr Zoom & The Sonic Boom.


Federici joined the E Street Band for Springsteen’s second album, 1973’s “The Wild, The Innocent & The E Street Shuffle”. All great bands are more than the sum of their parts, but Bruce Springsteen’s E Street Band illuminate that truth better than most. Never dominated or defined by one star instrumentalist, all members contribute often barely discernible parts to that instantly unmistakable exuberant uproar, an overwhelming hybrid of American popular music, echoing Motown, The Beach Boys, Phil Spector, The Band and Bob Dylan. Danny Federici rarely stepped into the spotlight, but it was his exuberant keyboard riff that lights up “Hungry Heart”, his electric organ filling out “Born To Run”, his glockenspiel serving as the subtle counterpoint that reined in the likes of “Born In The U.S.A.” just the right side of overbearingly bombastic.

During the E Street Band’s hiatus in the 1990s, Federici released a couple of instrumental jazz albums: he also played on records by Joan Armatrading, Graham Parker and E Street Band colleague Steve Van Zandt, among others. After farewelling Federici from the tour after his last full show, in Boston on November 19th, Springsteen described him as “one of the pillars of our sound”. He was exactly that, as Springsteen had acknowledged in greater, and probably unimprovable, detail at his 1999 induction into the Rock’n’Roll Hall of Fame, when he paid tribute to the band that had borne him to his greatest heights. He described Federici as “the most instinctive and natural musician I ever met, and the only member of the band who can reduce me to a shouting mess. . . your organ and accordion playing brought the boardwalks of Central and South Jersey alive in my music. Thank you.”