CUT of The Day: Pavarotti and U2 sing ‘Miss Sarajevo’ 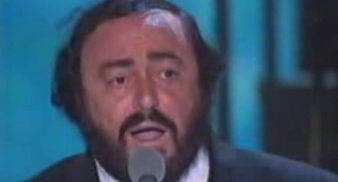 CUT of the day: September 6

Today, see opera legend Pavarotti with U2 and friends performing ‘Miss Sarajevo’ live at the Parco Novi Sad in Modena for the Warchild concert in September 1995.

The song written by Brian Eno and U2 and featuring Pavarotti’s immense vocals was created for the awareness raising charity Warchild’s album which was released the same year.

Pavarotti passed away in the early hours of this morning, aged 71. He had
been diagnosed with pancreatic cancer last year, for which he had surgery and chemotherapy, but was taken into hospital last month suffering a fever.

His manager Terri Robson said: “The maestro fought a long tough battle against the pancreatic cancer which eventually took his life.

“In fitting with the approach that characterised his life and work, he remained positive until finally succumbing to the last stages of his illness.”

If you have any trouble viewing the above video click here.