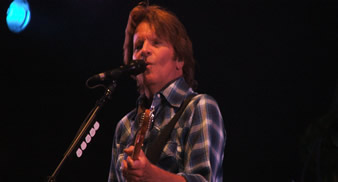 The former Creedence Clearwater Revival member came on stage to a huge reception, and said how pleased he was to be back in England.

Californian Fogerty, has only played one other show in the UK since 1972 – he stopped off for one gig this time last year, and he made reference to this at the start, saying: “It’s beautiful to be here at Glastonbury. I’m so happy to be in England again. But I ain’t here to do speeches, I’m here to play rock’n’roll!

The audience included festival organiser and fan Michael Eavis down at the front – he’d moved Fogerty’s set on the billing so that he’d have time to see him, and fit Pyramid Stage headliners The Killers in too.

John Fogerty got the crowd dancing and whooping with a batch of Creedence hits, 70s solo stuff, and a cover of ‘Heard It Through The Grapevine’ – the extended version which CCR used to play in the early ’70s.

Highlights included ‘Bad Moon Rising’, ‘Green River’, ‘Lookin’ Out My Back Door’, ‘Down On The Corner’and ‘Keep On Chooglin”.

Fogerty also provided Glastonbury with one of the best festival anthem sing-alongs with ‘Have You Ever Seen The Rain?’

Finishing up with ‘Rockin’ All Over The World’, a gleaming Fogerty thanked the audience, and promised he’d be back.

For more on Fogerty, and other Glastonbury news – check out the new Uncut Festivals Blog here- we’re also at Knowsley Hall this weekendwww.uncut.co.uk/blog/index.php?blog=10&title=