Adam Duritz and co. are second headliners announced for Wireless 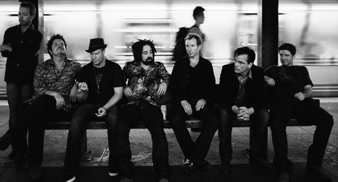 The Counting Crows have been announced as the second headliners for this year’s Wireless Festival in London’s Hyde Park.

Adam Duritz and co. will play their only UK headline show in 2008 on Sunday July 6.

The Californian band will play tracks from their forthcoming double-album ‘Saturday Night and Sunday Morning’ – one side produced by Gil Norton (Foo Fighters) and one by Brian Deck (Iron & Wine) – as well as songs from their extensive back catalogue.

Other artists announced for Wireless Sunday are Ben Harper & The Innocent Criminals and Aussie rockers Powderfinger.

Counting Crows join Fatboy Slim at the fourth year of Wireless. As previously announced, Norman Cook will headline the London festival on July 5, with support coming from Bootsy Collins and Underworld.

Further headline are expected to be announced soon.

Wireless takes place July 3-6 and tickets are on sale now.