But Rolling Stones have turned down headline slot 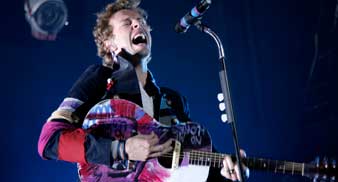 Coldplay will headline the Saturday night (June 25) at this year’s Glastonbury.

The band, who had been strongly rumoured to play at the festival, will top the bill on the Pyramid Stage for the third time in their career, reports The Sun.

However, The Rolling Stones appear to have turned out the chance to headline the festival, despite being given a “massive offer” to play, according to the newspaper.

Last year, organiser Michael Eavis hinted about the identity the Sunday night headliner, stating it is “an American artist that I’ve been wanting for yonks and yonks”.

He also told BBC News he has asked U2 to headline the festival on the Friday (June 24), but has yet to receive a response from the Irish band.

The four-piece were forced to pull out of headlining last year’s festival after singer Bono injured his back.