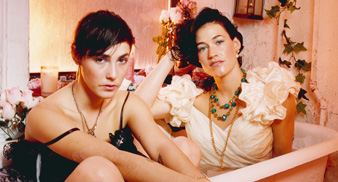 CocoRosie, Uncut’s favourite acid-folk-hip-hop-opera duo, return to the UK for a series of dates in June.

Bianca and Sierra Casady will be joined by Tez, a French beatboxer, for a series of shows which also promise “interpretive dancing”. Crikey.

CocoRosie bring the whole shebang to:

They’ll doubtless be playing plenty of songs from their third album, “The Adventures Of Ghosthorse And Stillborn”, described by Uncut as “An engaging piece of musical magic.”