The influential German electronica pioneer has passed away

The news was confirmed on Facebook by his bandmate, Michael Rother.

“Very sad news today for all friends of Dieter Moebius and his unique music. Our friend, neighbour and collaborator passed away this morning, July 20th 2015. He will be missed dearly by all of us. Our thoughts go out to his wife, Irene. RIP, Dieter (Möbi)”. 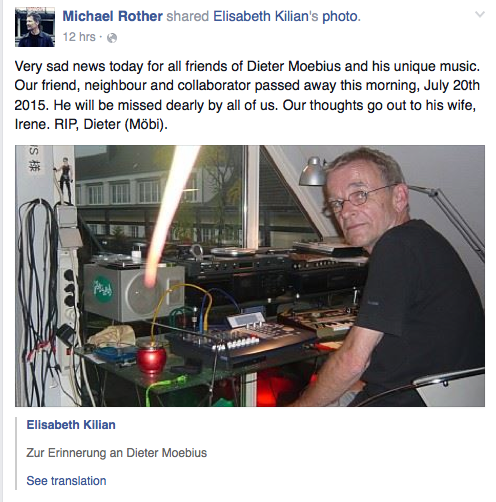 Moebius was born in Switzerland in 1944. He studied art in Brussels and West Berlin. In Berlin, he met Roedelius and Tangerine Dream’s Conrad Schnitzler at the city’s influential Zodiak Free Arts Lab; they formed Kluster in 1969. When Schnitzler left two years later, they began operating as Cluster.

The bond between Moebius and Roedelius was strong. As the latter explained to The Guardian in 2005, “We are completely different people. He is Capricorn, I am Scorpio. But because we liked each other personally we didn’t care. We did everything together. The only thing we didn’t share was our girlfriends!”

Between 1971 and 2009, Cluster released 11 studio albums; many of them in collaboration with Conny Plank. In 1973, Moebius and Roedelius moved to a rural village of Forst, where they built their own studio. They were joined by Neu!‘s Michael Rother, and together the three musicians formed Harmonia.

Brian Eno regarded Harmonia highly and briefly relocated to Forst to live and record with them. These sessions were eventually released as Tracks And Traces (1977). Eno also recorded two albums with Eno: 1978’s Cluster And Eno and 1979’s After The Heat.

In addition to his collaborations with Roedelius, Moebius also recorded over a dozen solo albums, most recently Nidemonex in 2014.

Interviewed in 2012 by Frieze, Moebius shed some light on his working practises. “I work with very simple machines,” he revealed. “The recorder, it all has to be easy to handle. All my records, like the last three, I make them with an eight-track digital recorder. And of course it’s a very different thing to produce in a studio with a guy who knows about recording, a recording engineer. When I’m working at home, it’s really the most simple way of recording, and I don’t have to pass my time with complicated machines. When I want to be creative, I need to have something that works nearly on its own if possible, that I can handle.”