The King is remembered in a series of concerts and vigils 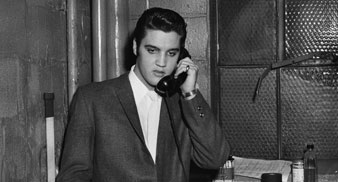 Celebrations will shortly be under way in the US today (August 15) to celebrate the 30th anniversary of Elvis Presley’s death. Events taking place in the next week include concerts, vigils and sound-alike competitions.

The King died on August 16 1977 at his Graceland mansion in Memphis, where tens of thousands of fans are likely to gather tonight for a candlelit vigil.

Graceland, also Elvis’ resting place, will open to visitors at 8.30pm (Memphis time) and the pilgrimage is expected to last until the early hours of Thursday morning as fans make their way past Elvis’ grave.

The week’s events also include a set of concerts by Elvis’ ex-wife Priscilla and musicians who performed with Presley and a sound-alike competition.

Local businesses are all cashing in with special edition chocolates commemorating Elvis’ well-known love of all things sweet. One peanut butter cup is imprinted with the slogan ‘Live Like The King’.

Todd Morgan, a spokesman for Elvis Presley Enterprises, said: “We’re gearing up for the best Elvis Week we’ve ever had.”

In other news, Elvis Presley’s daughter is to release a digitally enhanced duet with her late father to mark 30 years since his death.

Lisa Marie Presley is to appear in a video of Elvis’ 1969 hit “In The Ghetto”, which will be posted on Spinner.com.

Admitting the filming process was overwhelming at times, Presley said: “I’ve never cried when I’ve done anything, but I just lost it when I heard it. It’s pretty organic. There are no bells and whistles – they just added me into the original recording.”