Duo return for two rare shows in London this November 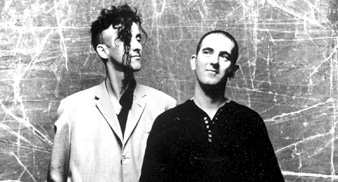 Carter The Unstoppable Sex Machine have announced they will play their first four albums in full at concerts at two London venues in November.

Entitled ‘The Drum Machine Years’, the first night will take place at the Kentish Town Forum on November 13 where the band will play ‘1992: The Love Album’ and 1994’s ‘Post Historic Monsters’.

The second show at Brixton Academy will see performances of their debut ‘101 Damnations’ and the follow-up, 1991’s ’30 Something’.

“We will be playing songs that we have never played live before and I am really looking forward to that challenge,” says guitarist Fruitbat. “If Sparks can learn twenty or so albums then we can do this. These sets should be marathons so I’m going to get in training. I think the audience should too as we’re all going to need to be fit for this!”

Carter USM reformed after a ten year break in 2007 for two shows at Brixton Academy and Glasgow Barrowlands. They returned the following year for a couple of gigs at Birmingham and Brixton Academy.

“We really enjoyed playing the reunion gigs,” says frontman Jim Bob. “They were fantastic life affirming celebrations and turned out to be some of the best ever Carter shows. We decided that if we did it again it had to be something different, for both the audience and for us. Performing out first four albums in full, first track to last is something we’ve never done. We might even chuck in a cheeky Take That style costume change.”

Tickets go on sale at 9am on Friday (February 13).