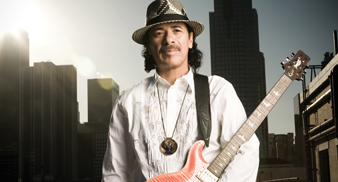 Carlos Santana has announced that he will play three shows in the Uk next June.

The ‘Live Your Light’ tour will see the guitarist and his band play arenas in Birmingham, Manchester and London, promoting the release of his first ever compilation album ‘Ultimate Santana’.

In the last four decades, Santana has sold over 90 milion albums…

Tickets for the shows go on sale on Friday November 23 at 9.30am.

Venues/dates are as follows: