Saddle up! Uncut takes part in a Sam Peckinpah panel at this year's Film Festival 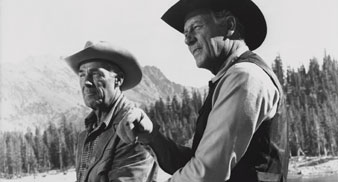 Uncut’s favourite film director, the late maverick Sam Peckinpah, was honoured at this year’s Cannes Film Festival in a series of events which took place on Monday, May 16 – including a panel discussing his life and work which featured Uncut’s Associate Editor, Michael Bonner.

The events kicked off with a screening of a new print of Peckinpah’s second film, 1962’s Ride The High Country. The film starred Randolph Scott and Joel McRae as two ageing gunfighters out of place in a world that no longer needed them – a theme Peckinpah would return to again and again in his films, most notably in his 1969’s classic, The Wild Bunch. The screening was part of the Festival’s prestigious Director’s Fortnight section and played to a full house at the 800-seater Fortnight theatre. As the final credits rolled, the audience burst into a spontaneous applause, with many cheering.

The panel following was hosted by Fortnight director Olivier Pere and included Uncut’s Michael Bonner alongside Variety’s Executive Director Steven Gaydos, Peckinpah biographer Gerard Camy and cult American director Monte Hellman. Hellman, who co-edited 1972’s The Killer Elite and cast Peckinpah in his own Western China 9, Liberty 37, provided a unique insight into his personal and professional relationship with the director: ‘Sam hid more and more behind a mask of machismo, but he never stopped being a poet,’ he concluded. Gaydos remembered introducing himself to Peckinpah as ‘one of his biggest fans,’ to which he received the reply: ‘Hell, boy, don’t you know you’re a dying breed?’ A champagne reception on the roof terrace at the Noga Hilton took place immediately after the panel and was attended by some heavyweight industry players, ranging from programmers for the London Film Festival to execs from Turner Classic Movies, one of the companies who made the day’s events possible.

Highlights from the panel can found at www.tiscali.co.uk.

Don’t forget the Uncut Film Of The Month on Turner Classic Movies on the first Wednesday of every month, next up – Rio Bravo on June 1.