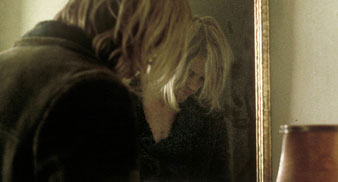 DARTH VADER’S asthmatic rasp has been playing at high volume up and down the Croisette for much of this year’s Cannes festival, but so far all of Uncut’s opening week highlights have been far removed from such hollow Hollywood grandstanding.

The emotionally drained, fly-on-the-wall anti-drama of Gus Van Sant’s LAST DAYS left many baffled, especially those expecting a conventional exploration of Kurt Cobain’s tragic final hours. But Van Sant insists his strangely hypnotic memoir is more “a poem about Kurt” than a depiction of real events. Even Cobain’s suicide is left open-ended. “Did he even kill himself?” Sonic Youth’s Kim Gordon, who plays a small role in the film, asked Uncut. “There are plenty of people around Kurt who think he was murdered…”

Downbeat Americana provides the inspiration for Daniel Jacobson’s DOWN IN THE VALLEY and James Walsh’s THE KING. The first stars Ed Norton as a modern-day cowboy with all the lethal, innocent charm of Martin Sheen’s silver-tongued killer in BADLANDS. The latter stars GAEL GARCIA BERNAL as an existential anti-hero who wreaks havoc on the family of his estranged preacher father, a towering tour-de-force performance by William Hurt. Both films boast rich alt-country soundtracks, with Calexico as a shared reference point.

Some bolshie Cannes veterans have received warm welcomes, including Danish enfant terrible Lars Von Trier for his provocative slavery drama MANDERLAY, which picks up where DOGVILLE ended in 2003. Meanwhile NYC post-punk veteran Jim Jarmusch and the perennially fabulous Bill Murray collaborate on the terrific bittersweet comedy BROKEN FLOWERS, proving that their sassy vignette in COFFEE AND CIGARETTES was no fluke. Murray is soulfully hilarious as a womanising rogue tracking down the child he never knew.

But as Cannes passes its halfway point, Uncut’s tip of the festival so far has to be David Cronenberg’s A HISTORY OF VIOLENCE, a roaring rampage of revenge based on a blood-splattered graphic novel. Viggo Mortensen stars as a mid-Western family man with a murky past that eventually catches up with him, leading to a some strikingly explicit carnage. In the hands of any normal director this would have been a generic pulp thriller, but Cronenberg somehow manages to give these B-movie ingredients pace, depth and subversive comedy. Once again, William Hurt burns up the screen in a scene-stealing support role, as does Ed Harris as a glass-eyed mob enforcer.

So much for the festival’s opening reel. Darth Vader may have packed up his inhaler, but Uncut will be here to the bitter end. Keep watching this space…