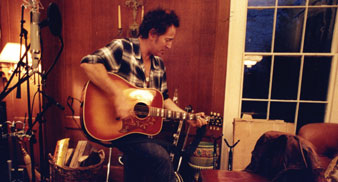 Bruce Springsteen is giving away the title track of his new album, “Working On A Dream”, as a free download today (November 24).

An MP3 of the song is available from iTunes store and Brucespringsteen.net now – however, the song can only be downloaded at a price from tomorrow (November 25).

The album was recorded with the E Street Band and produced and mixed by Brendan O’Brien, who has worked on the last three Springsteen releases.