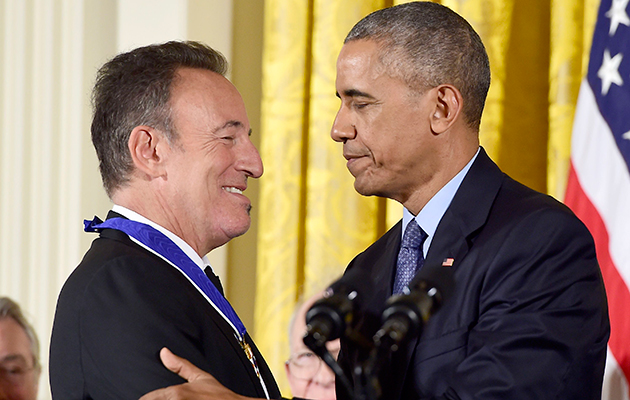 Bruce Springsteen has played a private acoustic set for Barack Obama and his staff at the White House.

According to Springsteen fansite Backstreets, via The Guardian, The Boss performed 15 songs for around 200 people last week (January 12), showcasing a career-spanning set of material.

After a short reception, staff and guests were called into the East Room, where Barack and Michelle Obama entered from the Green Room, followed by Springsteen, who first thanked the outgoing President and his staff.

Much of his set was understated, with Backstreets’ correspondent writing: “The mood in the room the whole night — both reception and concert — was not exactly sombre, but it wasn’t festive, either. It was elegiac, I’d say. There was a clear sense of something ending, both with the conclusion of an adventure for the staff and the silent presence of the coming political transition. Bruce’s demeanour was definitely in line with that overall vibe.”

Later on, Springsteen was joined by his wife and E Street Band mate Patti Scialfa on “Tougher Than The Rest” and “If I Should Fall Behind”, before he ended with a melancholy take on Born In The USA‘s “Dancing In The Dark”, and Wrecking Ball‘s “Land Of Hope And Dreams”.

Working On The Highway
Growin’ Up
My Hometown
My Father’s House
The Wish
Thunder Road
The Promised Land
Born In The U.S.A.
Devils & Dust
Tougher Than the Rest (with Patti Scialfa)
If I Should Fall Behind (with Patti Scialfa)
The Ghost If Tom Joad
Long Walk Home
Dancing In The Dark
Land Of Hope And Dreams